The love of Macedonia and our people is the source and goal of the unity initiative that the World Macedonian Congress (WMC) and Macedonian Human Rights Movement International (MHRMI) proudly announced today.

We believe that we share this principle of unity in both our association’s quests for a sovereign Macedonian nation and a free Macedonian people throughout the world, in which we both hold before all things and in whom we believe all things Macedonian come together.

We both believe that unity for the Macedonian people into one fully committed fellowship is the most effective way to combat the evil currently being afflicted on our people throughout the world and it is for such unity that we believe we must pray and work together.

Sadly, we as a people are not yet of a common mind on the interpretation and the means of achieving this goal and self-will in our community often operates to keep us separated, but we are convinced that unity is still a fundamental and underlying principle that all Macedonian organisations yearn for.

We also understand that unity does not imply simple uniformity of organization or expression and we constantly search to find a framework that allows this to happen whilst driving the unwavering principle of Macedonia above all. We are convinced it is something we can overcome. We think we can all have our voice and still be part of a collective.

There are of course organisations throughout the world that sadly have a sympathetic view towards the current direction that Macedonia is being forced to take. Those organisations will progressively and increasingly find themselves marginalised and isolated by the Macedonian people with unity initiatives like these. The groundswell of support is not with them even if the money from this abhorrent and morally bankrupt puppet regime may be.

Both WMC and MHRMI (as well as other anti-establishment voices) are currently the subject of a Zaev government media ban. All statements, initiatives and calls for answers are being suppressed and not being disseminated by the overwhelmingly censored media in Macedonia today. We have been blocked from Macedonian internet search engines and have social media nemesis fronts to counter any positivity with Zaev propaganda….but they can’t keep us quiet forever. Not if we rise in numbers as a collective voice.

We call on all Macedonian associations that hold this principle dear, to join this fight with us and help to present a united front to those who wish to destroy our nation and people. To share the great work we do individually and work as a collective, focused front of Macedonian passion and resistance.

As a perfect example, MHRMI is currently running some fantastic awareness campaigns in the Republic of Macedonia, in Canada and around the world which WMC have felt also completely capture our sentiment as an organisation and have always felt the people involved in MHMRI are above reproach when it comes to fighting for our homeland. We are extremely humbled and honoured to have them as one of our partners moving forward in our battle for our homeland. We thank them for their trust and faith in WMC. 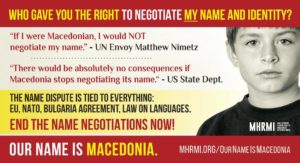 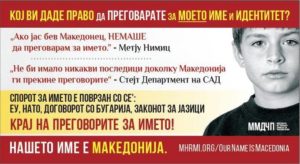