Macedonian Judge: “We’re getting threats and pressure directly from US Embassy”

This article was originally reported by Macedoniaonline.eu news agency on 7 November 2017. The World Macedonian Congress – worldwide reminds the Macedonian Parliament and the Macedonian people that this type of behaviour does not belong in a country hoping to secure its place in NATO or the EU.

Judge Vladimir Pancevski, former head of the Criminal Court and the top judge for Skopje’s Basic Court I, spoke to TV Alfa about the involvement of the US Embassy in Macedonia’s judicial system.

Judge Pancevski says there hasn’t been too much pressure on his job until the moment the illegal SPO was put “to work”.

“The SPO built fake cases, it announced their cases during press conferences and the US Embassy in coordination with the SPO got in touch with me and asked me to have a meeting with their rep David Stevenson.” The SPO announced their case as “Titanik”, but the US Embassy told me the SPO will launch another case called “Tvrdina” before it was announced. It became obvious the SPO is simply a tool for the US Embassy which was essentially ordering cases through a body whose legality is disputed.

US Embassy representative told judge Pancevski his “collaboration” with the US Embassy would be very good and beneficial for him. 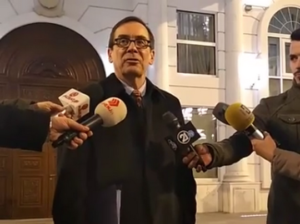 Instead of ‘collaborating’ and reaping rewards for it, judge Pancevski sent a letter to US Ambassador Jess Baily asking him to become more engaged in preventing the illegal work of his staff and the SPO’s dirty campaign against him.

So there you have it. A top Macedonian judge publicly admitted something everyone knew, the US Embassy is running Macedonia’s judicial system through bribery and threats.

Judge Vladimir Pancevski appears to be one of the very few Macedonian judges who isn’t on the US Embassy payroll and has been adamant on following Macedonian laws. He has entered his name once again for becoming the head of the Criminal Court.