Time for Macedonia to End the ‘Name’ Negotiations with Greece

By Oxford Professor James Pettifer – A personal view of the “name dispute” between Macedonia and Greece: Macedonia must end the name negotiations.

OXFORD, UNITED KINGDOM, April 22, 2018 — In a speech on April 15th, 2018, as reported in the Athens newspaper ‘Kathimerini’, NATO Secretary General Jens Stoltenberg called on Greece and Turkey to improve their relations and also stated that their current difficulties which have led to a military fatality last week are not a matter for NATO. At first sight this is a reasonable point of view, from a distinguished international figure and is a view that should be respected. But it is also bound to raise the issue in people’s minds, ’What is NATO actually for’ when two NATO members in the eastern Mediterranean region may be edging towards a wider conflict, in the view of many observers. It is against this background that the hapless Macedonian and Greek Foreign Ministers are continuing their weary rigmarole of staged meetings, where all that is on the table are a series of name possibilities, most of which have been around for ten years of more, and all of which offend major opinion constituencies in both countries. 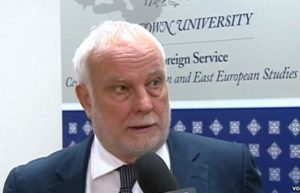 “As a sovereign nation, Macedonia must end the name negotiations because there is never a right time to resolve an issue in which one country/ethnic group does not recognize the other’s right to exist.”

If tensions were lower in the region, perhaps all this would not matter very much. Diplomats are the talkers of the international world and they need to find something to discuss. But the name issue is not that at the moment. The link to possible NATO membership is presented as a panacea to the Macedonian public, where everyone with detailed knowledge of the situation on the ground sees that this is not the case. The country has been close to NATO for many years. Personally, I remember interviewing the late President Kiro Gligorov back in 1994 when the Kosovo crisis was developing and I asked him what his policy would be if it worsened and refugee flows began in a future crisis. He replied that in the end, Macedonia would have little option but to cooperate with NATO, and it did so, to the great credit of the people, with huge camps being opened at places like Cegrane to accommodate those fleeing war.

In the post-conflict period, the country has also had a good relationship with NATO, particularly by contributing infantry to international coalitions. So NATO has little to complain about in terms of the Macedonian contribution to the war against terrorism and international security. Policies of this kind can surely carry on under any future Macedonian government if that is what the people wish. The intense pressure being applied to the elite in Macedonia to change the name to secure full EU and NATO membership is not only morally bankrupt but also destabilising in terms of regional relationships.

The background to the NATO and EU pressure is also unpleasant in other ways. The two countries are being treated like adolescents, by the ‘grown-ups’ that belong to the EU and NATO when in fact a good deal has been done quietly, bilaterally, to improve relations. People from the Republic of Macedonia travel on vacation to Greece and do business without difficulty, people from Greece are visiting centres like Ohrid and have a pleasant time and are made welcome. There are, however, significant human rights issues relating to the use of the Macedonian language, and cultural politics in northern Greece and these must be dealt with. Remember that the European Court of Human Rights, European Commission Against Racism and Intolerance, and the United Nations itself, have repeatedly demanded that Greece (and Bulgaria) immediately recognize their large Macedonian minorities – as Macedonians – and end the persecution of them. Basic recognition of an ethnic group’s basic human rights is an obvious way to improve relations, not worsen them as Greece and Bulgaria claim.

I started to travel and study in Macedonia and the region over thirty years ago, after making my first visit to Skopje in 1968 as an Oxford student to help with post-earthquake reconstruction work. I remember the fallen churches and minarets across the streets lying as piles of rubble as if it was yesterday.

Over those many years, the governments in Macedonia have a good deal to be proud of, and many recent achievements have been forgotten by the ever-scheming international elite diplomats of the West and their spin doctors. For instance, the government of Gruevski and VMRO-DPMNE navigated the international banking crisis far better than Greece did, with a prudent policy that certainly negatively affected living standards but also brought stability. A strong central government was necessary to do this. That fact has been completely elided from current discussions. There are other injustices. The Berlin pressure to take thousands of economic migrants is particularly unjust given that German policy caused the migration crisis in the first place.

How should the ending of the talks be achieved? Macedonian governments hear more than enough from non-Macedonians about what should be done, particularly from international figures whose real loyalties may lie elsewhere. I am reluctant to comment but it seems to me the best way is, as a sovereign and free nation, that the Republic of Macedonia end the name negotiations because there is never a right time to resolve an issue in which one country/ethnic group does not recognize the other’s right to exist. This is a point made by Macedonian Human Rights Movement International’s Our Name Is Macedonia campaign.

Macedonia and Greece, instead, can continue the steady ongoing process of improving relations, on a case by case basis. Also, in my opinion, given the unfortunate background of foreign interference in Macedonia, a central factor in the current crisis, the government should not be slow to declare people persona non grata and remove their diplomatic or other visas if they can be shown to have been acting contrary to the interests of the country. If there are people within the upper reaches of the current government who would also fall into that category, well, that is an issue for the Macedonian people, not foreigners, to decide how to act.

— Professor James Pettifer is the author of eleven books on the post-Ottoman Balkans and teaches at Oxford University, UK

— Macedonian Human Rights Movement International (MHRMI) has been active on human and national rights issues for Macedonians and other oppressed peoples since 1986.