We Need a Unitary Macedonia – WMC-A

The Macedonians in Australia, as an inseparable part of the Macedonian people, express concern for unity and statehood of Macedonia, the country’s name and identity of the nation!

We reject any federalization and easement of the Albanian language on the whole territory of Macedonia and in its international relations!

We consider only the Macedonian language and its Cyrillic alphabet is the one and only official language throughout the Republic of Macedonia and in its international relations!

The Macedonians in Australia are urging the democratic world to support the unity and statehood of Macedonia’s name and identity of the nation!

We believe that Macedonia is a state of and for the Macedonian people, in which all citizens are equal before the Constitution and laws, regardless of social status, ethnic origin, religious beliefs and party affiliation!

The Macedonians demand an end to the talks regarding the name Macedonia with the government in Athens. We demand immediate and unconditional membership in the United Nations and all international organizations under our constitutional name of Macedonia, with the use of the constitutional term “Republic” to adequately distinguish us from the northern province of Greece and south-western province in Bulgaria and all areas of historical Macedonia.

We reject the use of any prefixes to Macedonia in Macedonian but accept the “Republic of Macedonia”, when used in other languages. The international code MK or MKD are the appropriate identifiers and our identity and our language must always be referred to strictly as Macedonian.

We reject any interference by any nation in determining and describing our identity, especially Greece and Bulgaria who divided and colonised Macedonia during the Balkans wars of 1913. Those nations despite agreeing to international treaties to respect the rights of the Macedonians in those occupied areas, to this day refuse to afford the Macedonian people within their nations the most basic human and minority rights enshrined in United Nations and European Union law.

The Macedonians in Australia reject any name change of the nation, constitution, flag, coat of arms and anthem!

The World Macedonian Congress Australia is also asking for an immediate census to be done and it must be monitored by independent International auditors!

We call for an all-Macedonian reconciliation and unity because only in unity there is the strength to defend the country’s name and identity of the nation!

If any Government, political party or even a citizen of Macedonia does not agree with the above statement, then we highly doubt you have the best interest of the nation at heart.

Long live Macedonia! All Macedonians for one another! 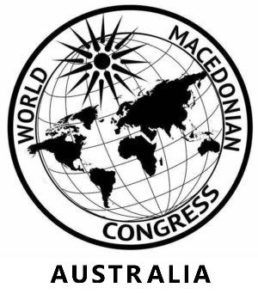