The Internal Macedonian Revolutionary Organisation (VMRO) was a Macedonian paramilitary active in the late 19th and first half of the 20th centuries. VMRO was founded by a group of intellectuals in the Macedonian capital of Solun in 1893, with the goal of achieving autonomy for Macedonia.

The establishment of the VMRO was the result of nearly two decades of agitation from the Macedonian nation: The 1878 Treaty of Berlin had promised autonomy for Macedonia within the Ottoman Empire but the provision, Article 23, was never ratified by the Sublime Porte. The 1880s were characterised by the formations of political institutions and societies such as the National Assembly of Macedonia and the Secret Macedonian Society who attempted to petition both the Sultan and the Great Powers to enact Article 23 and give the Macedonian people autonomy. It was with the exhaustion of all diplomatic efforts that led Hristo Tatarčev, Dame Gruev, Petar Pop-Arsov, Andon Dimitrov, Hristo Batandžiev and Ivan Hadžinikolov to pursue the only remaining option in the fight for autonomy; armed struggle. 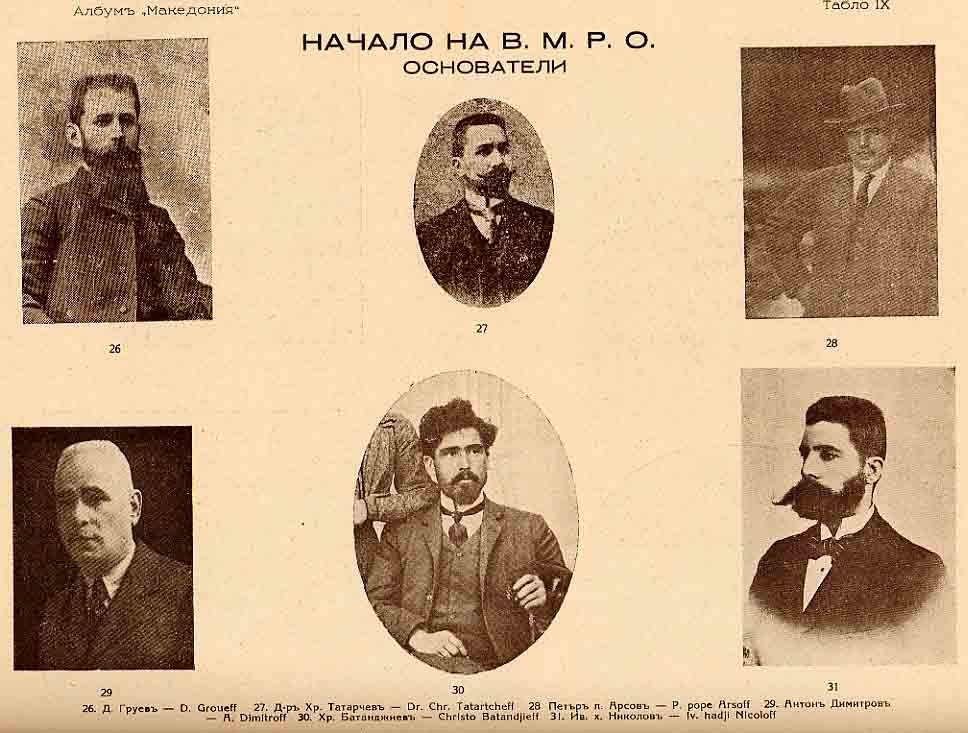 The founders of the VMRO

In 1895, the region of Adrianople/Odrin (later to be known as Thrace) was brought into the movement with the establishment of a separate committee that would work in cooperation with VMRO. Whilst northern Thrace had been reworked into an autonomous vilayet under the name of Eastern Rumelia (later annexed by Bulgaria in 1885) by the Treaty of Berlin, the remainder of the territory like Macedonia remained under direct control of the Sultan. Hristo Tatarčev noted that “….the fate of the Christian population…..did not differ with anything from that of the Macedonian people and where the political-social and economic conditions were almost identical to those in Macedonia”. 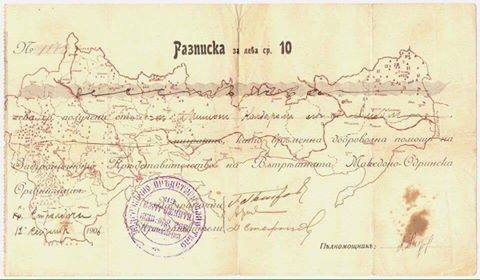 The active territory of the VMRO, Macedonia and Adrianople

The clandestine nature of the VMRO was shattered by the Vinica Affair of November 15th, 1897, which introduced to the world the existence of an extensive network of revolutionaries operating in Macedonia. The organisation had to contend with infiltrators and other hostile groups, notably from the Vrhovists (Macedonians who were Pro-Bulgaria). The Vrhovists of the Sofia-based Supreme Macedonian Committee instigated an uprising in Gorna Džumaja in 1902 in an attempt to destabilise the Macedonian movement and force the VMRO into a premature uprising. This occurred on Ilinden in 1903 with the initiation of a full-scale uprising against Ottoman rule, resulting in a short-lived republic operating from the town of Kruševo.

Flag of the Kruševo Republic

The failure of the uprising tore a rift in the organisation and it quickly descended into fratricide with various factions fighting for control. By the time the Balkan Wars had begun, the VMRO consisted only of factional groups, an utter shell of its former united self. These factions were responsible for both the Tikveš and Ohrid-Debar uprisings of 1913, the latter with assistance from newly-formed Albania.

Declaration of the Tikveš Uprising

In 1919 the VMRO was reformed by Todor Aleksandrov, his organisation is now retrospectively referred to as VMRO (Autonomist) to differentiate it from the previous incarnation. This new organisation gradually replaced the previous methods of armed insurrection and conventional warfare with more modern clandestine tactics, such as through assassinations and blackmail. Unfortunately, it didn’t take long for the new organisation to follow in the footsteps of its predecessor and become increasingly factionalised: Following the signing of the May Manifesto in Vienna 1924 and its subsequent denunciation from the Central Committee, many left-wing members of the organisation left and founded a separate group known as VMRO (United). This new organisation established itself more outside of Macedonia, in cities such as Vienna and Berlin and agitated more for non-violent activism and intellectualism as oppose to the “terroristic” actions of their Autonomist brethren. This new VMRO was also not free from factionalism however as by 1929 the increasingly Communist ideology of the new organisation forced non-Communist members to secede and form their own branch in Istanbul. A lack of funding and internal dispute forced this rogue faction into reconciliation with the Central Committee in 1931 however. The organisation had ceased to exist by 1936 due to the efforts of the Bulgarian government to quash the Macedonian movement and exercise full sovereignty over Pirin Macedonia.

The signing of the ‘May Manifesto’

In 1924, Aleksandrov was assassinated in unclear circumstances and the Autonomists were taken over by Ivan Mihajlov who ordered a string of assassinations all over Europe in order to cleanse the VMRO (Autonomist) of opposition and consolidate his authoritarian rule over the Macedonian movement. The most notable action of the VMRO during this period, and one of their most infamous overall was the 1934 assassination of King Alexander I of Yugoslavia in Marseille. The assassination was carried out by VMRO hitman, Vlado Černozemski in collaboration with the Croatian Ustaše; it was the first assassination captured on film. The extremity of the event leads to the full Bulgarian occupation of Pirin Macedonia, which had been functioning as a semi-independent state prior. The heavy response of Sofia all but crushed the VMRO (Autonomist) and Mihajlov went into exile in Rome. 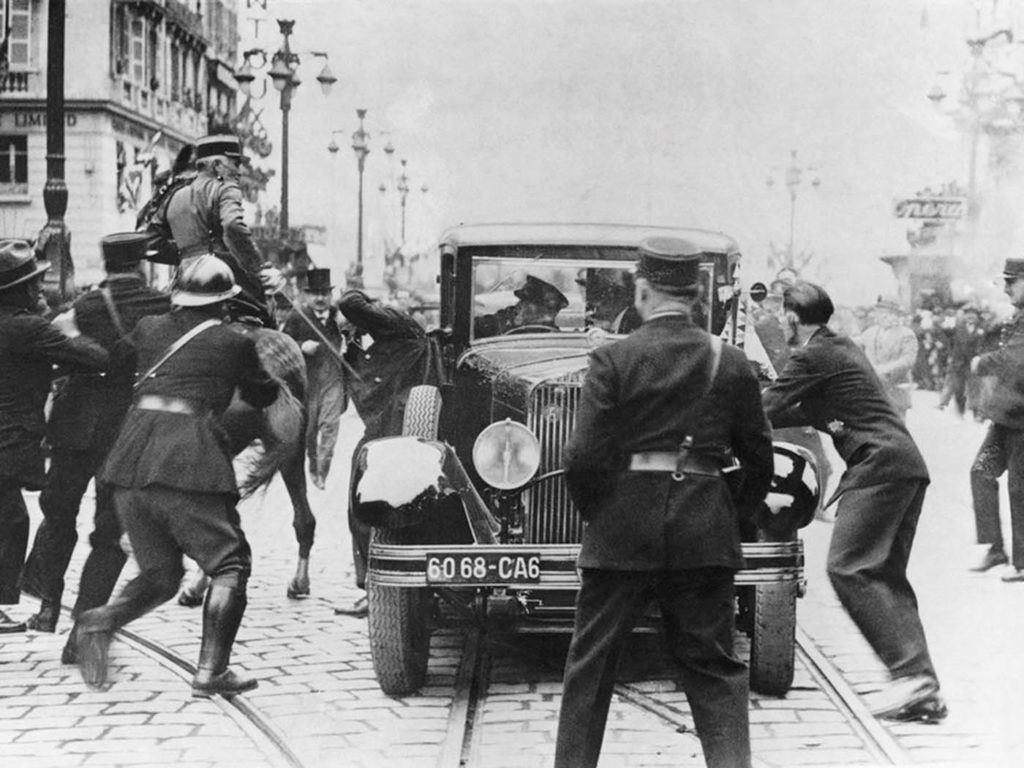 The assassination of Alexander I

There have been re-emergences of VMRO activity since the 1930s: The first was the false adoption of the name by Bulgarian collaborators in Macedonia during the Second World War, in an attempt to legitimise their actions. Another was the insurrection of the Pirin mountains in 1948, instigated by former komiti loyal to the VMRO philosophy. The final was the tragic case of the Strumica Five in 1951, who wielded VMRO connections.

The VMRO no longer exists today and its name is now only applied to certain political parties in both Macedonia and Bulgaria who claim ideological descent from the original revolutionary group. The VMRO is without a doubt the most celebrated and influential of all modern Macedonian organisations and one of the most infamous paramilitaries in history.