The Enemy of Macedonia Have Made One More Giant Leap in Destroying Macedonia!

The Republic of Macedonia parliament, on Wednesday, March 15th passed legislation to pass a dual language law for Albanian to be included for official use across all administrative levels, including the judiciary, municipalities, local councils, hospitals and all government departments. Reports indicate this will affect 130,000 administrative roles and positions within the Republic of Macedonia.

Previous legislation applied only to areas within Macedonia that hold a minimum 20 percent majority of the minority Albanian majority residence.

The legislation was passed and the parliamentary speaker, Talat Xhaferi, in a process of 3 readings during the session in parliament, omitted to include debate for the 35,000 amendments the former VMRO DPMNE opposition party had lodged for consideration, as per the legal requirements under the Macedonian Constitution.

Of the 120 members of the Macedonian parliament, 69 people had voted through the legislation, in response to being one of the final provisions under the brokered armistice when Albanian separatists conducted a war 2001, of the Ohrid Framework Agreement. 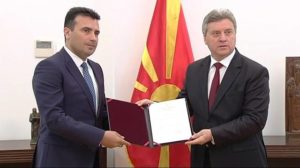 The original reading a few weeks ago, had been vetoed by President of the Republic of Macedonia, Gjorgi Ivanov as unconstitutional, requiring him to sign the legislation to confirm into the Consitution. President Ivanov had given the mandate to SDMS to form a government in April 2017, whereby the SDSM Party President, Zoran Zaev had given full acceptance to abide by the mandated provisions to form the government.

President Ivanov, in a press conference, has opposed the passing of the legislation and refuses to sign the new Language Law, vetoing as unconstitutional and on the basis that the mandate was not honoured.

The parliamentary speaker that was appointed, Xhaferi by SDMS when forming the government had previously led the separatist Albanian terrorist group, KLA (UCK) in 2001’s conflict against the Macedonian army. Controversy regarding what is considered to be an illegal installation of the Speaker into the Macedonian government, without the votes to confirm his position in April 2017.

The Language Law also incorporates fines to be imposed upon individuals and institutions that do not abide by the dual language Albanian in all dealings within Macedonia in administrative departments.

It is being widely reported that fines of up to 5000 Euro will be imposed on any breaches that are enacted of the Dual Language Law upon individuals and departments, requiring all Macedonian citizens to communicate in all dealings in Albanian.

Controversy also surrounds the legalities of the Language Law enactment, as per the Macedonian Constitution has been breached by the Speaker Xhaferi, passing the legislation in parliament with a minority vote of 51% whereby enacting new legislation there is a requirement that a two-thirds majority is required to officiate the legislation.

The Speaker invoked only Article 165 and, without debate, placing the law on languages into the voting, thereby violating the stipulated provisions of the Rules of Procedure, Article 153 states that each amendment is subject to a parliamentary debate and a separate vote. A very angry Former Prime Minister and former VMRO DPMNE leader Nikola Gruevski went behind Xhaferi’s desk and refused to allow him to go on with his announcement.

WMC-A National Co-Chairman Jim Stefanovski also reminds the people that, “Macedonia is the object of a special war conducted by the USA and the European Union, the goal of which is to change the country’s name, language and identity of the Macedonian nation via an illegally installed, puppet government. We call on the President to not give in and protect the nation and its’ current constitution”. 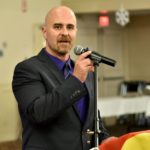 Macedonian Human Rights Movement International’s President, Bill Nicholov also stated on social media today, “The traitors in the Macedonian government have held yet another illegal vote, and this time they used it to make Albanian an official and equal language across the country in order to appease a minority population. This is an unprecedented action, not seen in any country around the world. And to further provoke the Macedonian people and add insult to injury, they did it on the anniversary of the date on which the Albanian terrorists – with help from thousands of illegals from Kosovo – took up arms against the country and began the last civil war in 2001.

We need our people to wake up before it is too late. Talk to your family and friends in Macedonia, give them your support in any way that you can, and encourage them to stand up against this tyranny – for their country, and for the millions of Macedonians around the world.

Macedonia needs us all – now more than ever.”

This Article brought to you by: (Sponsored Ad)