It is very important to remind the current Zaev government that most of us who oppose his joint project with the US Ambassador Bailey and friends and the mission they chose to accept, to finally complete the work which started over 104 years ago to destroy Macedonia and her people, are not happy and it all must end now!

We are all very familiar with these tactics, they are not new, they have actually been attempted before and records of this time in our country’s history is readily available as it happened not that long ago… and we know about it too well. The majority of Macedonians from all over the world are determined to stop Zaev, who is undoubtedly controlled by the current “Super Powers” (US, EU, NATO & Co.), who are all hell bent on completing their mission to end the ‘Macedonian Issue’ once and for all, anyway they can.

Here is a little reminder for those who failed Modern History at school and why the majority of today’s Macedonians have a problem with Mr. Zaev’s motives.

War and the suffering in Macedonia did not end after the failed 1903 Ilinden Macedonian National Uprising. Shortly after the Uprising was suppressed Macedonia became the apple of discord between Greece, Serbia and Bulgaria and to some extent Romania.

Unable to free itself from the Ottoman yoke, Macedonia became ripe for the plucking and whoever was able to muster enough strength and resources to drive out the Ottomans would have it in their possession. At that time Macedonia’s neighbours knew they could not possess Macedonia without the cooperation of the Macedonian people, so first, they tried their luck at “convincing” the Macedonians that they were not “really” Macedonians but “Greeks”, on account of them being Orthodox Christians. Or they were “Serbians” because they supposedly spoke an “Old Serbian” language. Or “Bulgarians” because they supposedly spoke a dialect of the “Bulgarian” language and of course “Romanians” because many were Vlachs who spoke a dialect of “Romanian”.

Failing to convince the Macedonian people “that they were not Macedonians” by propaganda alone, the four then resorted to using violence through the application of illegal armed bands. However, in addition to serving their masters by doing their bidding and murdering those who refused their will, these bands, consisting mostly of thugs, also served themselves by robbing, raping, beating and murdering innocent civilians. 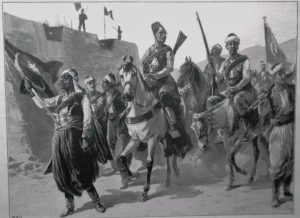 Now in addition to the dastardly deeds performed by the Ottoman army and the Bashibazouks (armed Muslim civilians), there were Greek, Serbian, Bulgarian and Romanian armed bands roaming the Macedonian countryside preying on the Macedonian people. The Ottoman authorities knew about them and so did the international peace keeping forces stationed in Macedonia but they did nothing to help the Macedonian population.

Unable to turn the general Macedonian population into Greeks, Serbians, Bulgarians, or Romanians to their satisfaction, by severe methods the four began to open more Greek, Serbian, Bulgarian and Romanian churches and schools in Macedonia, offering Macedonian children “free education” but not in the Macedonian language. Education was offered in the Greek, Serbian, Bulgarian, or Romanian language respectively. Unfortunately, along with the so-called “free education” came a heavy dose of foreign propaganda.

Along with their “free education” children and young adults were also offered a glamorous lifestyle, something their families in the village could not give them. Being “educated” and convinced that they would be more cultured and better off as Greeks, Serbians, Bulgarians, or Romanians these children were then sent back home to “convince” others and also turn them into Greeks, Serbians, Bulgarians or Romanians. Many of these “educated children”, as young adults, became the new teachers and priests in the Macedonian village churches and schools.

In addition to preaching and teaching they also unwittingly helped Macedonia’s enemies get a foothold in Macedonia. Those young adults who found their way back to who they really were or switched loyalties usually ended up dead because their benefactors could not tolerate traitors; a tradition Greeks practice to this day. Almost the entire Macedonian population during these times, particularly in the villages, was uneducated and could not read or write. So, many people relied on the village teacher or village priest to help them with administrative matters and filling out travel forms etc. And while they were doing a public service for their illiterate, fellow villagers these teachers and priests were doing their benefactors a favour by registering the Macedonians as Greeks, Serbians, Bulgarians, or Romanians with a Greek, Serbian, Bulgarian, or Romanian sounding name depending on who was their benefactor.

That is why Macedonians who traveled abroad during the late 19th century and early 20th century before Macedonia was partitioned, had Greek, Serbian, Bulgarian, or Romanian sounding names. These names which exist to this day can be found in the United States, Australia, Canada and other places outside of Macedonia where Macedonians immigrated during Ottoman times.

Mr. Zaev, We have remained Macedonians from Macedonia regardless of new borders and numerous attempts to change our country’s name. We have cursed those who have separated us as a nation and we will continue to see them as our enemy today. You are now on that same list!

We do not need any more division, we need unity. Do the right thing and retract and refuse to work with those who don’t have the best interest of the nation at heart and fight for the people you are supposed to represent, fight for the land you were born in and not sell it off. It is not yours to sell, it is ours, the people and we are not selling! Auction over! No Sale!