(December 18, 2017) – The article “Macedonia Says It Needs Prospect of Joining EU to Thwart Authoritarianism” by Patrick Wintour, which was published in the Guardian on 15 December 2017, is a sloppy piece of journalism and merely repeats the platitudes and highly erroneous arguments put forward by Macedonian Defence Minister, Radmila Sekerinska. There is not even a pretence of an attempt to critically examine the false arguments and misinformation which Ms. Sekerinska and her government have been disseminating since being brought to power by the USA and EU in June 2017.

The SDS-DUI-Alliance for Albanians coalition government came to power in June 2017 as a result of a two-year long campaign of destabilization orchestrated by the USA and the EU. This campaign included years of illegal wiretapping, the scale of which can only have been carried out by Western governments, a campaign of vandalism quaintly named the “Colour Revolution” which included defacing of public monuments in the capital Skopje (in which Sekerinska and Prime Minister Zoran Zaev participated), the demolition of the President’s downtown office, the open interference in Macedonia’s internal affairs by the US, EU and Soros-funded NGOs, and mass electoral fraud.

On 27 April 2017, the former commander of the terrorist offshoot in Macedonia of the Kosovo Liberation Army, Talat Xhaferi, was elected speaker of Parliament by coalition deputies without a proper headcount being taken, without minutes of the “session” being kept and in contravention of all established parliamentary procedures. This led to the storming of parliament by protesters outside who were outraged by the illegal election of a former terrorist. Regrettably, Ms Sekerinska and Zoran Zaev were injured in the ensuing melee (for which some of the perpetrators have been punished), however the protestors were not outraged by the fact that Xhaferi is Albanian – as Albanians have been a part of Macedonia’s government since independence in 1991 – but rather by the fact that an illegal procedure was used to elect as Speaker a person implicated in the murder of Macedonian soldiers during the war in Macedonia in 2001. Further, Xhaferi is a key figure in the infamous Tirana Platform – which calls for the denationalization of Macedonia and the changing of Macedonia’s name, language, ethnic identity, flag and coat of arms – all in the name of appeasing Macedonia’s neighbouring oppressors.

On 17 May 2017, President Ivanov reluctantly granted the coalition (which holds only 62 out of 120 seats) a mandate to form government after a campaign of intimidation carried out by the USA and EU (namely, pressure applied by US emissary Hoyt Brian Yee, US Ambassador to Macedonia Jess Baily, and Johannes Hahn and Federika Mogherini of the EU). Since its installation, the government, despite its protestations that it is “progressive, European and focused on the future” has proceeded to govern in a way which does little to distinguish it from the previous VMRO-DPMNE led government, which it so sanctimoniously accuses of “corruption, authoritarianism, mafia-like criminal activities and intimidation”. Let us be clear here, the previous government, as revealed by the yet to be authenticated illegal wiretaps, appears to have been involved in corruption, electoral fraud, misappropriation of state funds, muzzling of the media, authoritarian methods of governance and blatant disregard for democratic practices. However, the current government, in the seven months that it has been in power, has governed in the same way – and worse. It engaged in well-documented electoral fraud (including violence, intimidation and mass ballot stuffing) during the October 2017 local elections (how else to explain the fact that small ethnic Albanian parties which are part of the ruling coalition now hold many more municipalities than the largest opposition parliamentary party VMRO-DPMNE), it has stacked the judiciary with its own loyal allies and intimidated judges appointed by the previous government, it has used the so-called Special Prosecutor’s Office to selectively pursue political opponents, it has engaged in mass dismissal of public servants seen as too close to the previous government, and has muzzled the media and attacked freedom of speech by applying pressure to media outlets to dismiss or silence journalists critical of current government policies (Vasko Eftov, Milenko Nedelkovski). In addition, it has released from jail ethnic Albanian terrorists convicted of heinous crimes (the cases of Monstrum, Divo Naselje) pending “retrial”, while at the same time jailing 6 opposition MPs and the leaders of the ”Zaednicka Makedonija” movement, including world-famous opera singer Igor Durlovski and actor Vlado Jovanovski, on trumped up charges of ‘terrorism’ for their supposed role on the storming of the Parliament on 27 April.

Far from being a “success story”, as disingenuously stated by Mr Wintour, this foreign-installed government has ushered in a reign based on fear, intimidation, clientelism and total subservience to Western, Bulgarian, Greek and Albanian interests in its attempt to remain in power. The Albanian minority which numbers about 12% enjoys unsurpassed protection for its human and civil rights in Macedonia and has done so since Independence in 1991, yet this government, in its desperate desire to remain in power, is proposing to make Albanian an official language on the whole territory of Macedonia (including in those areas where no ethnic Albanians live), with draconian fines for the “improper Implementation” of the law on the Albanian language, and to cantonize the country by giving greater powers to those municipalities where ethnic Albanians live compactly and which form part of the ‘Greater Albania’ project envisaged by Albanian extremists. This is hardly a recipe for a lessening of ethnic tensions. It has signed an extremely one-sided Treaty on “Good Neighbourliness and Friendship” with Bulgaria so as to gain Bulgarian support for Macedonia’s EU/NATO accession. This treaty provides Bulgaria with the opportunity to meddle shamelessly in Macedonia’s internal affairs and foresees the rewriting of Macedonian history textbooks in order to downplay the crimes committed by the fascist Bulgarian, pro-Nazi occupation regime from 1941-44, including the deportation to Treblinka by Bulgaria of nearly all Macedonia’s Jewish population. In addition, Macedonia has by this treaty abandoned its constitutional obligation to protect the rights of the large Macedonian minority in Bulgaria. Further, the Macedonian media has been forbidden – as per Article 11.6 of the “Friendship Agreement” to report on human rights abuses suffered by the Macedonian minority in Bulgaria. A blatant attack on freedom of the media, yet ignored by The Guardian and Western media as a whole.

The one-sided media coverage of the Macedonian crisis has led us to ask the question – is it laziness, naivety or complicity? Case in point, the attempted assassination attempt of Macedonia’s former health minister (the government overthrown by the United States) was publicized from the attacker’s point of view in the Western media and was sympathetic to the fact that Macedonia’s failing health care system led to the death of the attacker’s granddaughter. Yet, coverage of the Parliament storming incident makes no mention that relatives of the Macedonians killed by the new Parliament Speaker are the ones who stormed Parliament. They have also been labelled as “extreme nationalists”. It is ironic that the actual extremist, Xhaferi, has the backing of the Western world. Imagine if an ISIS terrorist was installed in British Parliament or US Congress. Wait, that wouldn’t happen, but any opposition to it in Macedonia is seen as “nationalistic”. Moreover, Macedonians who defend their basic of human rights, those of self-identification and self-determination, are also seen as “nationalistic”.

The United States, United Nations and European Union have routinely pressured the traditional oppressors of Macedonia and Macedonians’ – Greece, Bulgaria and Albania – to recognize and grant human rights to their oppressed Macedonian minorities, yet they are now the ones leading the attack on Macedonia’s very existence. It behoves the Western media to ask the question “Why?” and intervene on behalf of an entire ethnic group’s basic human rights.

We actually agree with Ms Sekerinska on the point that Macedonia has no territorial pretensions against Greece, however, this does not mean that the current government has any mandate to agree to Greek demands that Macedonia changes its age-old name in order to appease Greek racism and extreme nationalism. It is clear that Greece wants Macedonia to change its name, not because of any territorial threat, which is a non-existent and laughable, but in order to cover up the crimes it has committed against its large Macedonian minority in Greece which resides mainly in that 51% of Macedonia that the Greek state annexed in 1913, and to avert huge compensation claims for confiscation of properties and human rights abuses against Macedonians.

Any name change will lead to Macedonia’s destruction as a unitary state and the eventual disappearance of Macedonians as a distinct ethnic group, and as such, there is no “reasonable compromise” that can be reached with such an implacable enemy. Yet, this government, beholden as it is to the USA, which wants Macedonia to become a member of NATO at any cost in order to ward off the illusory “Russian threat”, is prepared to negotiate away Macedonia’s name and the identity and past of the Macedonian people in order to satisfy Washington’s geopolitical rivalry with Russia. Sekerinska’s claim that the government is seeking a “decent and rational compromise” which does not threaten “our identity, pride or ethnic characteristics” is either an admission of complete political naivety or part of the softening up of Macedonians so that they will accept a catastrophic name change which, contrary to her assertions, will only encourage those nationalist forces in Greece, Bulgaria and Albania which would like nothing better than to see the destruction of a Macedonian state.

This article does nothing to dispel the deep mistrust that Macedonians world-wide feel towards the current Macedonian government and its complete neglect of Macedonia’s vital national and security interests. The Guardian and its journalists should not uncritically accept the bland and frankly meaningless assertions of a minister whose government’s destructive policies will do nothing to secure Macedonia’s future as a vibrant European democracy.

To view original article “Macedonia Says It Needs Prospect of Joining EU to Thwart Authoritarianism” by Patrick Wintour, please click on the photo below; 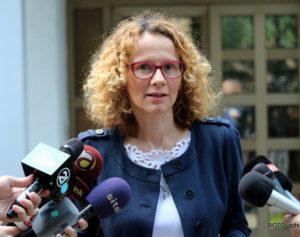