Goce Delchev – “The revolution of the hearts, minds, and souls of an enslaved people is our greatest task.”

On the eve of Ilinden, the revolutionary uprising of Macedonian national heroes who fought against the occupation of the Ottoman Turks – 2 August 1903, current SDMS leader Zoran Zaev is signing a “Good Neighbourly friendship agreement “ between Bulgaria and the Republic of Macedonia.

External factors the last few years have driven governments in Macedonia to capitulating to foreign interests, to appease the neighbours holding occupied regions of Macedonia, with the minorities, who lack basic human rights, are denied their basic right to self determination and have been neglected by Republic of Macedonia in all their “negotiating” phases of extreme capitulation. The Interim Accord saw the interference of Greece as a member state of the EU demand Macedonia change its national flag, coat of arms, & pushing all references to Macedonia as a derogatory acronym on the world stage.

Macedonian citizens within the Republic of Macedonia, have always sought to become members of the European Union, which is fast becoming obsolete, with recent Brexit as an example. Macedonia has also sought to become a NATO member, and are quasi-representatives within the peace keeping forces, yet, without reference to Macedonia, but as a derogatory acronym.

The global Macedonian diaspora, can see where corporate globalization has caused rising inequality in the capitalist like structures of the West, and yet, Macedonians in the Republic, seek entry into these two obsolete failing structures, as a means of climbing out of poverty, unemployment being a major factor that governments have failed in their duties to provide equal opportunities to their citizens.  Instead, the governments have been so focused on capitulating to demands from the west,  uninvited pressures from America, as can be seen by recent 3000 military soldiers currently in Macedonia, as a ‘friendship’ exercise ; and provocation with US Ambassador Baily frequent outspoken behavior contra to Macedonian sovereignty, and unbecoming of any foreign ambassador interfering in domestic country affairs

Within Macedonia, there is a ‘Laiisez faires’ attitude, that, once part of the golden sinking ship Titanic that is the EU, and the false premise of NATO being anything but pushing western interests into the small Balkan state, that the governments will have no need to provide infrastructure and capitalize on treaties with Asia Pacific, China, and other countries, to stimulate the economy and contribute to employment.

The apathy and the servitude mentality lives well within the Republic of Macedonia, citizens have been so enslaved, both geographically, and brow beaten, that there is a sense of hopelessness amongst some, disempowerment, and downright acquiescence to whatever government is in place. Seeking a sense of appeasement and no dissension, and mere acceptance of their lot, by governments that have had levels of corruption that have not been addressed, have a government in place that has not abided by Macedonian constitution with the installation of a speaker with an almost empty parliamentary house.

People that are supporters of all forms of the capitulation of identity, either are fearful of repercussions amongst them as individuals, or it is just as simple as stating, ‘they do not care’. Am reminded of a saying – “if you don’t stand for something, you will fall for anything”. Sadly, this seems to be the case within Macedonia, citizens are either so steeped in apathy or fear, they refuse to engage in peaceful protest of civil disobedience but acquiesce to being controlled and manipulated by a government that does not have the basic Macedonian national interest at heart – their very identity. 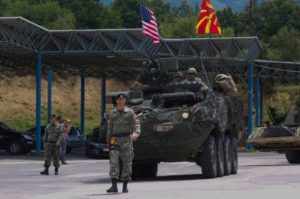 Sources state that there have been threats of arrests, for anyone that will protest against having US military heavy presence of soft occupation, that if anyone dares to protest hosting Bulgaria at Macedonia’s most sacred Ilinden commemoration, they will be severely dealt with & arrested. Macedonian “democracy at work” and following their loose ‘rule of law’

Reflecting on one of the greatest revolutionaries for freedom of an oppressed people, and one of his most famous quotes  Goce Delchev- “the revolution of the hearts, minds and souls of an enslaved people is our greatest task”, this quote rings as true for 2017 as it did for 1903.

Julie is also the National Media spokesperson for the WMC-A