Russia and China are wary of having their multipolar Balkan mega-projects transit through a state which increasingly looks likely to end up internally partitioned or worse, and is instead considering rerouting their planned corridors through Bulgaria instead.

There was once tremendous hope that the landlocked Central Balkan country of the Republic of Macedonia would become “land-linked” in serving as one of the most important transit states in Russia and China’s multipolar Balkan megaprojects of the Balkan Stream gas pipeline and Balkan Silk Road high-speed railway, respectively, but those hopes are seriously threatened by the latest infrastructure news coming out of the region.

In response to Zaev’s shadow implementation of the “Tirana Platform” in disproportionately empowering the Albanian minority and moving towards the de-facto internal partitioning of Macedonia, which itself is being pushed forward under the tacitly blackmailed threat of an Albanian-driven Hybrid War if it doesn’t occur, Russia and China are taking steps to reroute their multipolar Balkan mega projects through Bulgaria in order to avoid this simmering zone of instability and safeguard the security of their future investments.

Right now nothing is official, but the writing’s on the wall that the two Great Powers are looking to diversify their previously planned strategic dependence on Macedonia as their preferred transit route into the heart of Europe. Take for example what Russian Energy Minister Alexander Novak said in late August about his country’s interest in selling Turkish Stream’s gas to Bulgaria, which could either go through the planned Greece-Bulgaria Gas Interconnector or directly from Turkey to the South Slavic country. For reasons of strategic complementarity with China that will be made clearer in a little bit, it’s likely that Russia would opt for the first variant because it would also allow Moscow to improve the regional position of its Athens ally.

This is ironic in a sense because Russia commissioned Turkish/Balkan Stream in response to Bulgaria’s shelving of its South Stream predecessor, but it just goes to prove that Moscow might rather rely on Sofia than Skopje in light of the dark future that its strategists could be predicting might lie ahead for the Republic of Macedonia. Increasing the prospects that Macedonia will no longer be a direct part of Balkan Stream is the recent trilateral meeting between Bulgaria, Greece, and Serbia where all three states agreed to deepen their energy cooperation, which obviously refers to Balkan Stream given the current context.

It’s not just Russia that’s considering moving its Balkan mega-project away from Macedonia, but also China as well, which originally had plans to build a high-speed railroad through the country in connecting the Greek port of Piraeus with Budapest and beyond. Instead, however, China might consider detouring through Bulgaria as opposed to risking the future tumult that might explode in Macedonia. This idea doesn’t come out of nowhere, however, as it’s based on the recent development of Greece and Bulgaria agreeing to build the multi-billion-dollar “Sea2Sea” high-speed railway to run alongside their planned Russian-sourced pipeline. This demonstrates that there might be a deeper level of coordination between Russia, China, and their relevant Balkan partners in pioneering a new route for their mega-projects than initially meets the eye. 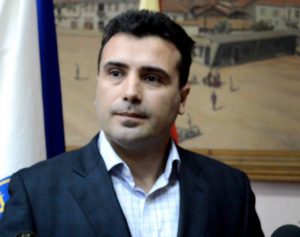 Another factor to keep in mind is that Zaev has been very unfriendly towards the Chinese since his installation into power and even “delayed” two Beijing-funded road projects in a clear signal of hostility against the People’s Republic, likely done at the behest of his American backers. The Chinese are wise enough to know that leaders come and go, especially those pushed into power through a “constitutional-electoral coup”, but Beijing might think twice about Macedonia’s future political stability just like Moscow appears to be doing and make the decision to accept the added financial and transport costs in rerouting its famed high-speed rail project through what it expects will be the much more stable country of Bulgaria instead.

By and large, the geostrategic situation doesn’t look promising at all for Macedonia, and Russia and China’s contemplation of alternative routes for their multipolar Balkan mega-projects appear to be much more than just a knee-jerk reaction to Zaev. Rather, these Great Powers seem to be signaling that they expect the country to enter into a period of prolonged political unrest, or at the very least, be indefinitely kept in a blackmailed position whereby the Damocles’ Sword of Albanian Hybrid War threateningly hangs over the head of every Macedonian and their international partners.

For this reason, it looks unlikely that Russia will include Macedonia in its Balkan Stream plans, and there’s a chance that China might feel the same way too given how Greece and Bulgaria’s new railway plans open up another alternative for it as well. The strengthening of the Greco-Bulgarian Strategic Partnership is designed to make both countries the indispensable replacement for Russia and China’s much-needed access to Serbia, the Balkan pivot state, and this contributes to giving both Great Powers an enticing option for avoiding what they might predict will be the enduringly uncertain situation in Macedonia for years to come.

None of this, however, would have been possible had Zaev not worked with the US to illegally seize power in his homeland and take Macedonia down the radical path of a de-facto internal partition, which when combined with the government’s capitulation to this demographic’s demands, is the reason why Russia and China are reluctant to have their multipolar Balkan mega-projects transit through the country. Not only has Zaev harmed Macedonia’s grand strategic interests in this way, but he’s also sold its remaining national ones to Bulgaria through the recent treaty with it and looks to be on the verge of betraying his people’s very identity through what many have speculated is an imminent behind-the-scenes deal with Greece.

Tragically, Zaev has empowered his country’s two rivals to join together in forming what might soon turn out to be the Greco-Bulgarian cornerstone of Russia and China’s multipolar inroads to Europe, thereby threatening to relegate Macedonia into geostrategic obscurity in the emerging Multipolar World Order aside from being a ticking unipolar time bomb for disrupting its Balkan component sometime in the future.