The ‘Bojkotiram’ and Boycott movement was a resounding success globally, with a total of just 2785 registered diaspora expected to attend polling booths to vote for a name change for Macedonia.

The Australian Macedonian diaspora numbered a total of 16 voters who attended the Embassy in Canberra and Consulate in Melbourne to vote in the Referendum.

World Macedonian Congress Australia was present at both the Embassy and Consulate acting as Accredited State Electoral Commission International Observers, providing Macedonians with a factual figure of voter turnout and how  500,000 Macedonians within Australia stood in regards to changing Macedonia’s name and identity.

The Embassy and Consulate were monitored by both, Victorian State Police and the Australian Federal Police in Canberra where no arrests were made nor any incidents reported.

SDSM backed news sites and some SDSM Politicians in Macedonia are reporting that the police were called to prosecute and arrest the civil protesters. They are also, incorrectly stating that Macedonians have been imprisoned in Australia. This is incorrect and should be retracted and corrected by those news sites and Politicians as defamatory against Australian Macedonians, and defamatory against Australian Rule of Law.

Australia is a true democracy, where the right to free speech and civil disobedience in the form of peaceful gatherings is legal. It is also legal to photograph and take videos outside of premises that have polling booths.  These acts do not go against the Australian Constitution and the Macedonian SDSM government has zero powers to enact any Macedonian authority within Australia.

National Co-Chairman Mr. Jim Stefanovski stated, “I am disgusted to see malicious and inaccurate reporting by some Macedonian media outlets. One news article showed photos of individuals who have been accused of ‘harassment’ in Melbourne, Two of those pictured were WMC-A appointed and officially accredited ‘International Observers’ by the Macedonian State Electoral Commission who spent the entire day inside the polling area.” Mr. Stefanovski went on to say, “World Macedonian Congress Australia condemns in the strongest possible terms the defamatory and false allegations that there were any arrests. Police who attended and were present were quite jovial with the protesters and saw no need to enact any such false arrests.”

Four of the Accredited Observers in Melbourne

Four of the Accredited Observers in Canberra

Official WMC-A reports on the results of the referendum were posted on their Facebook page stating;

29 September 2018, Canberra, Australia – At 7 am, AEST,  the Referendum on changing the State Name Macedonia, at the Macedonian Embassy in Canberra and the Macedonian Consulate in Melbourne commenced.

In front of the Macedonian Embassy in Canberra, you will be able to see the presence of members of the Federal Australian Police and a group of Macedonians who came to express their revolt against the referendum. So far, no incidents have been reported.

At 7 pm (AEST), voting in the referendum on changing the state name, Macedonia, at the Macedonian Embassy in Canberra and the Macedonian Consulate in Melbourne ended.

Out of 103 voters registered on the voting list, for the referendum, in Canberra, 9 voters cast their votes, 6 of which voted FOR and  3 voted against (ie 7.7% turn out), and in Melbourne of the 104 registered voters voted 6 voters out of which 5″ for “and one invalid ballot (ie 5.7% turn out).

Out of 84,000 citizens with official Macedonian citizenship, 207 registered to vote in the referendum in Australia, only 15 voters voted, or 7.2% of total number registered.

Approximately 500,000 Macedonians live in Australia from all parts of Macedonia.

Voting ended peacefully without any incidents. 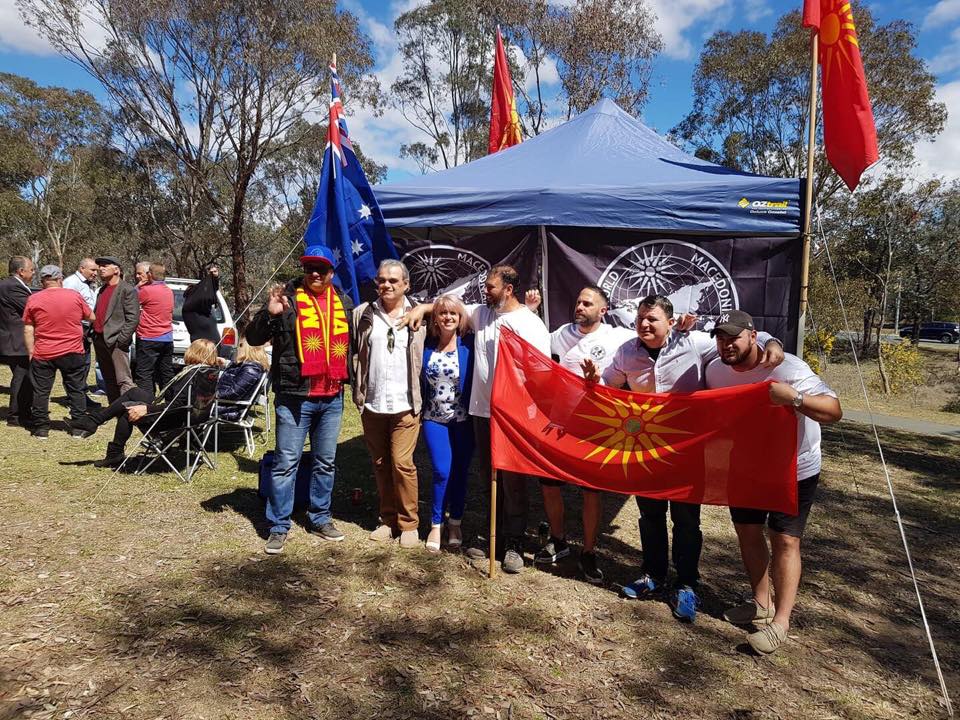