Macedonian Name for the Macedonians Only

They felt that the ethnic cleansing of the ethnic Macedonians living in Greece was successful; the repopulation of Macedonia with recently transplanted Christians from Asia Minor was completed and the eradication of anything Macedonian from the newly acquired territory of Macedonia was an accomplished fact. Gleefully, they must have concluded that this subject was dead and buried and there was no reason to dwell on this topic anymore.

I remember visiting a restaurant in Windsor, Canada in the late nineteen seventies, where we met a patron who was quite cordial and pleasant fellow at first, but as soon as we revealed our identity as Macedonians, this fellow abruptly became indignant; his facial expression changed, and you could tell that he was brewing with anger inside and was visibly quite disturbed. He hurriedly got up, bolted towards the exit and as he was leaving the restaurant shouted: “there is no Macedonia; there are no Macedonians.”

This illustrates that Greeks before the breakup of Yugoslavia felt quite comfortably secured in the notion that Aegean Macedonia [Greek occupied Macedonia] was fully Hellenized and the file on “Macedonia” securely wrapped up and locked up inside their national archives. And as long as the other “Macedonia” (in the Yugoslav federation) was under the firm control of their 1912-13 partners in crime, the Serbs, they believed that they had nothing to fear about. The fact that one of the sixth constitutive republics of Yugoslavia was called “Macedonia” and her inhabitants called themselves Macedonians did not register any alarm in the Greek government. But as soon as the breakup of Yugoslavia was imminent and the Greeks learned that Macedonia will become a separate country, they fetched an idea that the name “Macedonia” belongs to them and the real ethnic Macedonians cannot use it.

Taking advantage of the difficulties and the precariousness of the position in which the Republic of Macedonia found itself, Greeks embarked on a campaign to prove to the world that the name “Macedonia” exclusively belongs to them since the ancient Macedonians, who conquered and enslaved Greece for centuries, became not just “Hellenes” but the champions of Hellenism overnight. The Republic of Macedonia, regrettably, did not put up a serious challenge to this Greek charade. Thus, Greeks, now emboldened by their initial success proceeded to push further. Desiring to destabilize the country to the point of disintegration, they imposed economic embargo hoping for an administrative collapse of the country through economic strangulation. The fact that neither the ancient Greeks nor the ancient Macedonians ever considered each other as brethren was lost to them.

The fact that their own Greek 19th century historiographers rightly excluded the ancient Macedonians from the Hellenes and considered them as conquerors of Greece was dismissed in favor of the new political thinking that “Macedonians” and “Macedonia” were always Greek. Whence, we must ask ourselves the following:

(a) Why this sudden and highly speculative shift in Greek thinking?

(b) What is the reasoning behind such a highly unusual, politically unethical, conventionally immoral and historically unprecedented Greek request of the Republic of Macedonia to change its name? and.

(c) Do they think that the writings of the ancient chroniclers can be cooked and manipulated like they cooked and manipulated their financial disclosures to the EU? Why all of a sudden were Greeks awakened with a desire to be called “Macedonians”? Why, indeed? Why go against their previously held 19th-century position where they viewed the ancient Macedonians as people of a different nationality quite separate from the Hellenes? Why disrespect their own “Greek sons” who felt that Macedonians were a separate ethnic group of people who conquered Greece and did not share in the richness of the Hellenic nation? Why dismiss the works of their earlier Greek nation builders and historiographers like Paparrigopoulos, Gregorios Paljuritis, Lambros Antonijadis, Koubourlis, Politis, Oimaras? Why go against the proclamation of their first Greek President Yannis Kapodistria who called for a sovereign and independent Macedonian State? Why instead of “occupied territory” as King Georgios I called the Aegean Macedonia (which the Greeks received from the west as a gift, as payment for their services as bulwark against the “communists’ advances” from the east), today they claim that Macedonia was always Greek?

For many people, this issue about the name is a trivial and unimportant thing deserving neither time nor attention. For us, though, the ethnic Macedonians, it is of a pivotal importance. It is of pivotal importance because the name issue is just the tip of the iceberg. Underneath its apparent, innocuous name change demanded by the Greeks, lurk hosts of venomous implications with calamitous consequences for all Macedonians. The Greek plan envisions and hopes to accomplish the following objectives:

(1) eradication of our existence as people, (2) obliteration of our identity as Macedonians and (3) annihilation of anything Macedonian, including, most importantly, our Macedonian language.

This is a well-planned, methodically prepared and systematically executed Greek plan of action employed since 1913. With the acquisition of Macedonia, after the Balkan Wars, the Greek government embarked on Hellenizing the newly acquired territory. Willy-nilly, the population of ethnic Macedonians had to conform to the envisioned Greek doctrine -“they must be made Greeks” and so the brutal policy of forced assimilation began in earnest, sparing neither the rod nor the hand. This in effect is but a continuation of that policy.

These people, these ethnic Macedonians who endured decades of persecution, state-sponsored assimilation and persistent, degrading humiliation in the hands of the Greek authorities, have recently awakened and started to assert their identity as ethnic Macedonians. This is the crux of the matter. This is what Greece fears the most. But Greece will not be in this position if not supported by some European nations. Some of these nations who support Greece in this irrational demand about the name of the Republic of Macedonia (there are 138 nations in the world who have no problem calling Macedonia by its constitutional name), have done it because of economic advantage.

Greece was obliged to buy huge amounts of French weaponry and expensive German-built submarines in exchange for their support. Too bad that the forged financial reports on Greek economy got entangled in a web of perennial lies and fabrications and did not pass the test. Greece’s late engagement with communist China did not raise an eyebrow in the west either. Fact is that the massive financial help and political support Greece has received from the western countries in the past one hundred or so years, was, strictly speaking, because of her stand against the communists.

The hypocrisy of these western European bureaucrats is overwhelming: they criticize other countries about human rights violations but remain conspicuously silent on Greece. What puzzles me the most, though, are their constant deflections of the truth: instead of saying that Macedonia’s accession into the European Union is delayed because of the Greek veto, they say that Macedonia’s entry into the union hinges on the name problem. We have no problem with the name; 138 other nation in the world, among which are Canada, USA, China, Russia, India, just to name a few, have no such problem. Do the math; how many billions of people have no such problem?

The problem is not the name of Republic of Macedonia but the Greek veto. Stop hiding behind your finger. Stop being a dull, unimaginative and recalcitrant pencil pusher. If you represent Europe and claim that you uphold all the conventions on human rights issues, then, stand up and be counted. Do not be a hypocrite. Do not close your eyes to countries that implement bigoted policies and exhibit racist behavior. Nothing diminishes your integrity more than a hypocritical stand on important human rights issues.

The above was taken from J.S.G. Gandeto’s book “The Theft of a King Who Stole Alexander”. The book is available through; https://outskirtspress.com/thetheftofaking 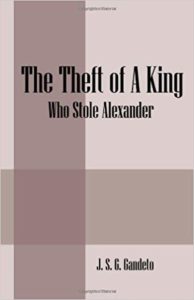 J.S.G. Gandeto was born in Lubojno, Macedonia. Educated at Ss Cyril and Methodius University of Skopje, the Republic of Macedonia. He immigrated to the United States and continued his studies at Wayne State University, Detroit, Michigan and Nova South-Eastern University in Fort Lauderdale, Florida where he received his post-graduate degrees. He recently completed his 29th year as an educator and has since retired and is continuing to pursue his passion for writing. In 2002 he published his first book Ancient Macedonians – Differences between Ancient Macedonians and the Ancient Greeks. In 2005 he published the romantic novels One Golden Ray upon the Rock and in 2007, The Wolves of Trappers Bluff.

In the Macedonian Language, he has published the following novels: Spasa’s Light in 2004, Saraf in 2009 and Rosamarina’s Grave in 2010. Book of poems Muabeti in 2003, poemata Ko Jagne in 2005 and Majka -Egejka in 2009. Currently, he is preparing for publication his latest novel Folded Impressions.