World Macedonian Congress – Australia is proud to announce a new book named, ‘MACEDONIAN LINGUISTICAL ROOTS – Found in Segments of the English Language and in Biblical Texts’, has just been released to the public.  (One Written in English and One in Macedonian)

This book, written by Australian-Macedonian Author, George Dimovski, has had many great reviews from academics around the world including Macedonian Historian and Author, Aleksandar Donski.

There are Two parts to the book, for the first part the reader is introduced to many terms that are found in today’s English language of which are attributed to the Greek, Latin or Germanic languages and in other instances are said to be of Old or Middle English. There are very few terms that are accredited to any of the Slavic languages. Yet when we look at these terms at the morpheme level it becomes apparent that many of these terms are deeply seeded in the Slavic languages. We can only pose a question here to why this is so. Could the answer to this question partly have a connection to the second part of this book?

We do not believe that it is of any coincidence that many biblical terms tend to reveal more accurately attributes of some of the more well-known biblical characters such as Jesus Christ and Moses or of Samson and his strength. It is the Macedonian language and other Slavic Languages that have truly embraced the Christian scriptures like no other language group of Europe or for that matter the World.

It is not only names but of motifs as well, for example, the ‘dove’ symbolises ‘peace’ and ‘love’ but it is the Slavic languages that reinforce this through the term (голуб) ‘golub’. We also find that the term (вода) ‘voda’, at first glance mirrors the English term ‘water’ but once again this appears to have a biblical connection, it stands for leadership, a (водач) ‘vodach’.

So what does all this imply? The Slavonic scriptures were introduced much later than the Greek and Latin but yet many terms that are uttered by the people known as “Slavs” in their own languages tend to unify them to the Gospel. The term for sun or (сонце) ‘sontse’, at a morpheme level, denotes ‘creation’ and appears to have given rise to the English word ‘sun’. In English, no other meaning can be extracted from this term as in the case of the Macedonian language.

Macedonian culture and in particular the language and its influence may be older than most know or want to know and appears deeply rooted in much of Europe and the various language groups spoken there.

The Author states, “I am aware that the title of this book, refers to words that exist in English whose basis can be found within the Macedonian language, as well as the existence of original Biblical terms that can be interpreted with the appropriate Macedonian words, can cause doubt and disbelief in some readers.

For those who have actually thought about this topic (especially the ones who are proficient in English and Macedonian, mostly Macedonians in the diaspora), I am sure that they have noticed similarities (in pronunciation and meaning) between words in English and Macedonian, without being able to explain them. One of the many examples in the English language is the pronoun “beyond” that resembles the Macedonian phrase “би онде” (bi onde – “it is there”). Both of these words have similar pronunciation and meaning (somewhere over “there”). We also see a similarity between the English word for cutting “lop” and the Macedonian verb “лупи” (lupi – “to peel”). Or even the similarity between the English verb “beat” (or ‘hit’) and the root of the Macedonian noun “битка” (bitka – “fight”) and many more.

So, is it actually possible for the Macedonian language (and other Slavic languages) to have had an influence on the English language? Without claiming any “sensational” revelations, we will name many more examples, including basic words. There are many examples that will be presented for it to simply be considered a “coincidence”. At the same time, we will point out some historical facts in order to offer historical justification of this situation, leaving the readers to conclude for themselves.”

If you would like to order your book now before we publish it on online shops, please get in touch with WMC-A or Jim Stefanovski, via FB message.

If you own a business and would like to stock these books, please get in contact with Jim Stefanovski for more information.

The cost is $25 per copy, not including postage. We are happy to send to any part of the world. 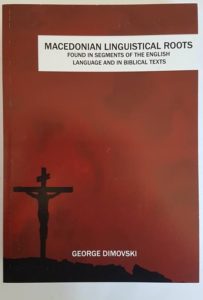 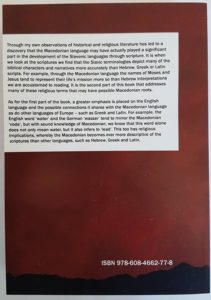 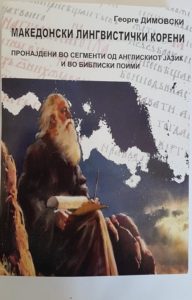 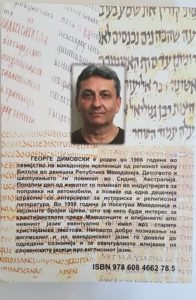 ABOUT THE AUTHOR: GEORGE DIMOVSKI born in 1966 to Macedonian immigrants from the Bitola region in today’s Republic of Macedonia. Raised and educated in Sydney, Australia, he has spent the majority of his life in the automotive repair industry and has pursued historical and religious literature as a passionate interest for more than a decade. In 1998, a visit to Macedonia and its many churches ignited a curiosity for Christianity within the Macedonian nation and the influence that its language appears to have brought upon the very scriptures. His knowledge of both English and Macedonian language has also led him to the probable influence the Slavic Languages may have had on the English language.