JERUSALEM – “The Republic of Macedonia sees immense potential in deepening cooperation with Israel in the area of security,” Macedonian Prime Minister Zoran Zaev said Sunday at a meeting of the Israel Council on Foreign Relations (ICFR), which operates under the auspices of the World Jewish Congress, in Jerusalem.

ICFR Board Member Prof. Shlomo Avineri welcomed Zaev, who was accompanied by a high-level delegation that included the Deputy Prime Minister, Ministers of Agriculture and Interior, and other senior officials.

“The global challenges we face are immense….Radicalism and extremism have been problems at Israel’s doorstep for many years, but today, no country can turn a blind eye to these issues,” Zaev declared. “Extremism has become a threat for all, no matter how far we are from the core of the problem. We need more intensive collaboration between countries in order to secure world peace.”

Referring to the potential for investment and tourism, Zaev noted that “there are no visa requirements for our citizens to travel between our two countries,” which is beneficial to both sides.

He also drew attention to the fact that Macedonia is working to maintain the Jewish cultural heritage in his country, particularly in remembering the Holocaust, which claimed the lives of nearly the entire Jewish population. The historic Jewish cemetery in Bitola, he explained, is now being restored and Macedonia is seeking partners to assist in that effort.

Zaev also expressed satisfaction at Macedonia’s victory over Israel in a football match the previous night in Haifa, and quipped that one third of his government was on hand to cheer the team on.

Asked by ICFR Board member Prof. Shlomo Avineri whether a solution could be found to the question of the name of the country, to which Greece objects, Zaev said, “As a new government we are trying to find a way to resolve this question. The problem is that Greece wants us to change our constitutional name and official language. But perhaps the name Macedonia can bring us closer together, not push us further apart. I hope 2018 will be the year of the solution to this problem. Why? There are no elections in my country and no elections in Greece.” 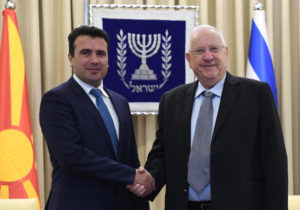