Goseva: Where is the competence of the Parliament to change the name of the state?

The Constitutional Court today discussed the decision of the Assembly for constitutional changes adopted by the Parliament on October 19. There was a stormy discussion among the judges whether the two initiatives initiated by the World Macedonian Congress and by lawyer Tome Todorovski from Sveti Nikole should be accepted.

The judges Jovan Josifovski and Elena Goseva believe that the opening of the Constitution is an important issue that deserves attention and that the court should take into account the two initiatives.

According to Gosheva, the court also examined far-reaching issues, such as whether some workers were dismissed from work after a change of government, and that this deserved attention. 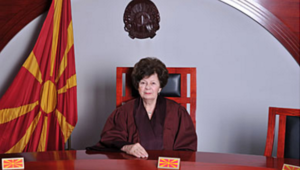 Josifovski also argues that the section on the opening of constitutional changes was also voted with 80 lawmakers, citing decisions of the Parliament’s Presidents, Stoyan Andov and Tito Petrovski, when 81 MPs demanded a two-thirds majority.

“The court can not run away and say that it is not an inventory. I think that the way in which the decision was made and whether it was adopted with the required majority should be determined” – said Josifovski.

The judges also did not accept this issue to have a public hearing and a preparatory session, and will later come up with the final decision whether the initiative is accepted or rejected.