The WMC-A would like to bring to Honorable Julie Bishop’s attention, the Agreement was actually signed on 17 June 2018 and would like to question the premature announcement.

The Agreement has not been ratified, it has been vetoed by Macedonia’s President Gorgi Ivanov as unconstitutional and there has been no formal referendum called for the Macedonian people to vote. There has been opposition from both countries on the “Agreement”, and it is extremely undiplomatic of Australia to involve themselves in this process.

World Macedonian Congress – Australia would also like to bring to the attention of Ms Julie Bishop and the Federal government, the sizeable Australian Macedonian population, who have contributed to the fabric of Australian society for 100 years. The premature media release is provocative and the Australian – Macedonian community rejects the unconstitutional Agreement and will continue their support for President Ivanov to exercise his right to veto.

A Spokesperson for WMC-A said, “Unless Ms Bishop was psychic, there is no way she would have known the agreement would be signed 3 days later or did she? It is also very worrying for  Australians when a Minister in the Australian Government supports the illegal act of High Treason, which Prime Minister Zoran Zaev has committed against his country and people. A constitution is there for a reason, it is the Law of the Land, if it is broken, it is a serious crime. Most legitimate democratic countries around the world would have had Zaev in prison, at least, and in some, the death penalty is still in force for High Treason. For Ms Bishop’s information, no country has any right to negotiate on another country’s name. To strengthen security and prosperity in a region you may negotiate government policies but not the name!” 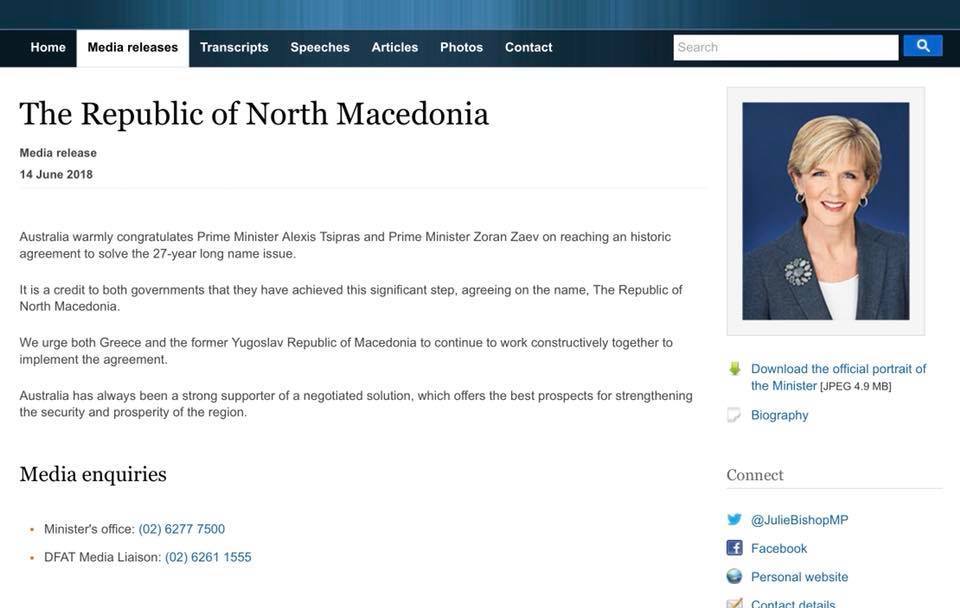