Arthur Sinodinos may be unwittingly Greek

Parliament’s dual citizenship debacle may claim another scalp, with the possibility raised that Senator Arthur Sinodinos may be a Greek citizen.

But Sinodinos has emphatically denied that he is anything but an Australian citizen only.

The Industry Minister was born in Newcastle, but it has been suggested he may unwittingly hold Greek citizenship by virtue of his late parents who were born on the Ionian island of Cephalonia.

In his maiden speech to Parliament, Sinodinos spoke about his birthplace and that of his parents.

“I was also fortunate to be born and bred in Newcastle, New South Wales, a sunny place where the beach was never far away,” he said in 2011.

“My late parents, Dionysos and California Sinodinos—she was named after the state of California by her uncle—hailed from the island of Cephalonia between Greece and Italy. “If you ever saw the movie Captain Corelli’s Mandolin, it was set on that island.”

According to Greek law, a “child of a Greek father or a Greek mother acquires Greek citizenship by birth”.

“Media reports today that I hold dual Greek citizenship are false,” he said in a statement.

“Categorically, I am not a dual citizen.

“I have never held Greek citizenship.

“I was born in Newcastle and have lived all my life in Australia.

“My citizenship status has never been in question.

“I have recently confirmed with the Government of Greece that I have never held Greek citizenship.” 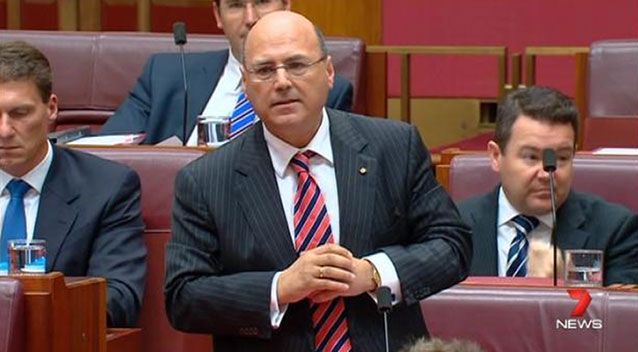 Federal Industry Minister Arthur Sinodinos has denied allegations he could be a dual Greek citizen, after claims his parliamentary eligibility was in doubt due to his ancestry. Picture: 7 News

Greek migrants were required to register their children’s birth with the Greek consulate at the time of Sinodinos’ birth.

Unless his parents failed to do so, Sinodinos would be a dual citizen and thus ineligible to serve in Parliament.

Nine.com.au has reached out to the offices of Prime Minister Malcolm Turnbull and Opposition Leader Bill Shorten, neither of which have commented at the time of publication.

As the former chief-of-staff to John Howard during his prime ministership, Sinodinos is regarded as one of the sharpest thinkers in the parliamentary Liberal party.

Sinodinos would be the seventh parliamentarian to be under a dual citizenship cloud.

Greens Senators Scott Ludlam and Larissa Waters resigned once it was revealed they unwittingly held New Zealand and Canadian citizenship.

Meanwhile, Independent Nick Xenophon, One Nation’s Malcolm Roberts, the Liberals’ Matt Canavan and the Nationals’ Fiona Nash and Barnaby Joyce are all going to the High Court to determine their eligibility for Parliament.