What is language?  Dictionary.com defines it thus;

“Common to a people of the same community or nation, geographical region, or same cultural tradition”.

In the Republic of Macedonia, under the contentious government led by Zoran Zaev, dual language bill has been put before its Macedonian parliament, seeking to implement Albanian and seeking to change the construct of the Macedonian nation.

To fully understand the ramifications of this implementation, one must understand the forces that divided Macedonia amongst Greece, Bulgaria, Albania and the Republic of Macedonia absorbed into the Kingdom of Serbia in 1913.

There was no social construct or agreement between the Macedonian people, but a rather manipulative mechanism of destructive forces that sought to commit a cultural and ethnic genocide of the Macedonian people and nation, who had already suffered grave injustices under the Ottoman Empire, for 500 years.

A systematic process of cultural and ethnic genocide, which still continues to this very day, of the denial of the Macedonian minorities that fell behind the newly imposed borders, to seek to destroy, and eradicate any evidence of the existence of Macedonians, through the abolition of anything remotely acknowledging their right to self determination, and basic human rights in any of the western, or EU ( which may as well call itself the United States of Soros Europe) . “Agreements” and “treaties” imposed in recent times to not acknowledge or remotely provide any form of  recognition of the Macedonians that were ethnically cleansed from traitorous ‘agreements’, in the Republic of Macedonia incredulous quest to enter the gates of the EU and NATO, by forgoing its very identity; incredulous as countries are leaving the EU as Brexit has shown us.

As for Greece – who holds Macedonia to ransom for its name, in its so-called enshrined “democracy” negates the existence of its minorities, and turns the cheek when far right wing neo-fascists attack Macedonians for holding cultural ethnic gatherings and celebrations, as evidenced by closure of “Makedonski Dab”, a Macedonian Cultural and Education Centre in the historically Macedonian city of Voden now known as Edessa since Macedonia’s partition in 1913 to Greece. 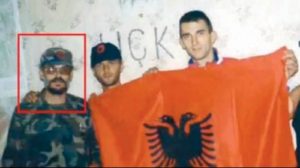 From the illegal installation in the Macedonian parliament, of a former UCK commander, Talat Xhaferi, who was involved in the slaughter of Macedonians in 2001, as a Speaker, with minimal input from the required majority, parliament has evolved into chaos, with dual languages to be the official Macedonian Republic as official…, with no recent census to support the incorrect claims of a 25% composition of Albanians in Macedonia.

Yet, in Greece, the ethnic Macedonian minority is not afforded the same rights, representing similar numbers, of having Greece accept Macedonian as a dual language recognized country. Or the ‘friendship’  treaty with Bulgaria – has not sought to have Macedonian as a dual language for their minorities. This writer drily refers to that agreement as the ‘Besties for Eva’ agreement. Or in Albania – where only until very recently acknowledged Macedonian minorities – does not reciprocate either.

Instead, we have greater forces at stake, that the West has employed Islamic forces of Albanians, rather hypocritically, to pander to the Greater Albanian dream.

In Australia, there are in excess of 200 separate recognized ethnicities that are afforded their basic human right to self-determination, worship, culture, however, there is only one national language and that is the English spoken one. How is it that in the Balkans, we have Macedonia, being systematically piecemealed, negated, suppressed and have the interference from  Soros and Western countries in its parliamentary decision making? Macedonians are a peaceful people, and to lose the dominance of the Macedonian language as an official language in its own country is a travesty.

Language, name, identity – these all go hand in hand with ethnicity, all that can be gleaned from recent events, is the destruction of the Macedonian nation, a chain reaction leading to the federalization of Macedonia as its neighbours hover at the border, like wolves to the slaughter, Macedonians are being led into a day, where the country ceases to exist or be known as Macedonia. Parallels to the Palestinians and the Kurds, a nation without a country.

You may take the country, change the language, obliterate the existence of culture, ethnicity, but you cannot take the identity of what is in a person’s soul.