History is Written by the Victors, but it’s Victims Who Write the Memoirs

History in Macedonia has always been written by the victors. Those same victors who throughout history have hung, enslaved, murdered, raped and pillaged on their path to victory at the expense of the vanquished.

To hide these injustices and crimes, it is common place in historical narratives to have documented atrocities manipulated into stories of victory or swept under the carpet of history as unsubstantiated mistruths. Such are the consequences of the 1913 partition of Macedonia and the Bucharest treaty. It is definitely one of the darkest years in Macedonian history. The partition of an ancient holy land gifted to the vultures of the Balkans, leaving the indigenous Macedonians searching for their rightful homeland and fighting for existence. The treaty ensured that Macedonians were left residing in redefined borders in newly formed alien and territorially contrived states. Greece received 34 356 km2, Serbia 25 342km2, Bulgaria 6 798km2 and Albania 1115km2.

The addition of ancient Macedonian land incorporated into a newly formed Albanian state was welcomed with open arms by the willing beneficiaries. The government of the newly formed Albanian state immediately engaged in historically oppressive methods, and in a throwback to Ottoman era oppression they implemented them ruthlessly, persecuting the Macedonians at every opportunity. Pressuring the population and enforcing again the conversion from Christianity to Islam. As evidence of this historic persecution, many villages and towns in today’s eastern Albania already had a large concentrated Islamic Macedonian community. A majority belonged to the Miyak tribe who were forced to assimilate during the reign of the Ottomans while at the pinnacle of the empire. Macedonians in both eras were forced to convert to Islam or seek refuge leaving their centuries old homes behind.

As a backdrop to this history of oppression, it needs to be noted that Macedonia was attacked and conquered by the Ottomans in 1392 and remained it in the Sultans’ hands for the next five centuries. Macedonians in today’s eastern Albania and the Macedonians in the west of the today’s Republic of Macedonia were left vulnerable defending themselves for centuries from a monstrous religious front, which bore no remorse. The majority of the indigenous Macedonian population have always been Christian and belonged to the Ohrid archbishopric which was established by King Samuil, in the holy town of Ohrid. Continuous murder and constantly persuasive measures to convert from the Ottomans, left the mass populace repeatedly resisting them which subsequently lead to regular brutal retaliations over the 500 year period by the Ottoman authorities. Many towns were sacked, villages burnt, forcing the Macedonians to migrate to safer regions, often cleansing the lands to be settled by the Ottomans loyal vassals.

In 1913 at the signing of the Bucharest treaty, Macedonia was partitioned and divided but not without dispute amongst the benefactors. The town Piskupija for example and the monastery Sv Naum ended up under illegal Albanian occupation. Due to Serbian pressure, the French who acted as arbitrators returned Sv Naum to the Serbs but left Piskupija in Albania. Piskupija was a completely Christian town and is located in lower Debar. The name itself is derived from the word episkopija or Episcopacy in English. It is also written in old Ottoman documents dating back to 1672 that the town Piskupija, located north east of today’s Albania, was situated in regional Debar then called ‘Makedonska Kelija’. In Piskupija there were twelve churches, one monastery dedicated to Mother Mary and the town belonged to the Debarska eparhija.

The continuous uncertainty causing large migrations of the Macedonian people in Albania once again occurred in 1915-17, followed by 1923, 1929, 1939 and the largest of them all in 1949-60. During the second world war, a successful attempt to evacuate and relocate the Macedonians from the town of Debar was enforced by a large group of bloodthirsty fascist Albanian balists. During all oppressive rule, the Macedonians were suffocated and constantly forced to seek safer refuge eventually coming to a halt at the end of the second world war when the Macedonian partizans captured the grand balist Dzemo and annihilated the greater Albanian expansion. 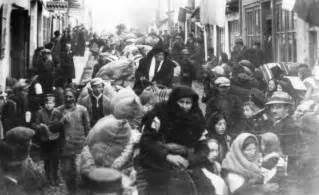 Evacuation of the Macedonians from Debar in 1942

The persecution of our people has been and is, a continuous method imposed by our neighbours that occupy Macedonian lands, to eradicate us from the face of this earth. It is a satanic procedure to cover up the centuries old genocide inflicted on our people and a negation of our god given right to be Macedonians on Macedonian soil.

A list of Macedonian towns and villages in Albania today;

Aegean part of Albania there is one village by the name of Vrnik.

There are also large communities of Macedonians in the larger cities of Albania such as, Elbasan, Drach, Korcha, Bilishta, Pogradets, Skadar, Librashd, Valona, Fier, Patos and the capital Tirana.