Macedonians In Greece Were Exposed To All Sorts Of Torment

The Macedonian people’s fate is similar if not identical to the fate of the Irish of Ireland and to the Kurds of Kurdistan. Those lands faced the same tragic fate as Macedonia – to be mercilessly butchered into two or more parts, as dictated by the greedy appetites of their imperialistic neighbours. However, the people of these countries; the Irish and the Kurds, did not have to live through the unthinkable humiliation perpetrated against the Macedonians, using brute force to deprive them of their mother tongue and imposing a foreign nationality on them.

Even under Great Britain, the Irish remained what they have always been, Irish. And even though the Kurds in Turkey, Iran, Iraq and Syria lost their territorial unity, they still have kept their ethnic mark, their language and traditions.

In 1912 the Macedonian people lost their national compactness and territorial unity. The ruling regimes in Greece, Serbia and Bulgaria, through their propaganda campaigns, not only strived to turn the Macedonian people into “Serbs”, “Greeks” and “Bulgarians” but told the world that “Macedonians do not exist”. The Macedonians in Greece were then exposed to all sorts of torment. They were forced against their will, for example, to participate in the First World War and to fight in the front line for Greece. They were also forced to work for free; provide slave labour for the allies on the front line at the Solun Front. Later they were mobilized and sent to fight for the Greek army in the Asia Minor Campaign. 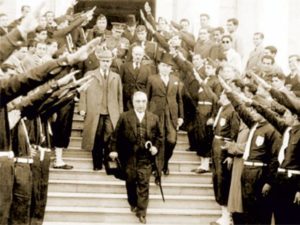 Then, to reward them, the Greek regime placed them before their military courts and had many of them executed for trying to claim their national rights within the Greek state. Then, during the Metaxas dictatorship (1936 – 1941), they were banned from speaking their native Macedonian language, the only language they spoke, and not just in public places but also inside their homes. They were not allowed to speak or sing Macedonian songs.

But the Macedonian people in Greek occupied Macedonia never came to terms with the fate laid out for them by the Greek regime. Their desire for national freedom was always present and simmering inside of them and every time they were given the opportunity they struggled and sacrificed themselves for their ideals. Should we mention the names of the Macedonian people sentenced to death by the Greek military courts in Lerin or in Kozani, immediately after World War I? How long must we remain silent when our very dignity is attacked even in death? We cannot forever keep silent about such things.

Before his execution in the city Kozhani, on December 12, 1925, Atanas Popov from the village Boreshnitsa, Lerin Region, not only refused a blindfold, but when he was asked if he had anything to say he said: “My greatest joy is that I will paint the southern border of Macedonia, which is the river Bistritsa itself, with my blood…” Let us also mention the young Atanas Markov from the village Tsakoni who, while being judged by a military court in the city Ber in 1948, boldly told the court: “I only ask for mercy for your executioners who execute my people!” Atanas was a partisan fighter fighting on Mount Karakamen. He was captured after he was wounded.

A testament to the Macedonian people in Greek occupied Macedonia who did not wait for freedom to come to their homes but rather who left their bones in the infamous dry Aegean Island prisons like “Edi-Kule” or “Akronavplion”, in the prison camps like “Heidari” and “Pavlos Melas” and by sprinkling the tree of liberty with their blood in places like Kaimakchalan, Vicho, Gramos and Karakamen.

Let these words serve as a small and modest compensation for the thousands of known and anonymous fighters who individually, or together with their comrades, died for honour, freedom and justice. 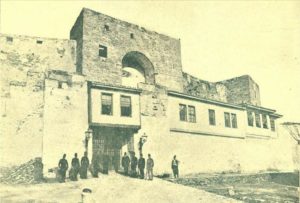 Main gates of Edi Kule or Heptapyrgion in Solun