Macedonian Author and Publisher Risto Stefov once said, “Dear Macedonians, one way to defend ourselves from the Greek onslaught and gain back our identity and dignity is to fight back to the level to which the Greeks have reduced us; that is to attack their identity as they have attacked ours. We need prove nothing to them except to expose them as the artificial identity they truly are and to uncover their design to wipe us out in order to usurp our Macedonian heritage.”

There are some who say the 1903 Macedonian Ilinden Uprising was one of the greatest Rebellions Europe has witnessed since the French Revolution (Giorgio Nurigiani, “Macedonia 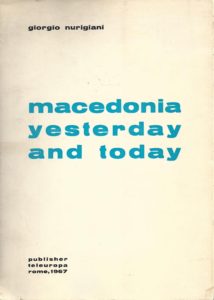 Yesterday and Today”) yet there are others today who adamantly claim that Macedonians don’t exist.

If we are to take these people seriously we not only need to examine their claims but we need to understand their motives for making such claims.

Modern Greeks, who in 1912, 1913 acquired Macedonian territories by conquest and imperial means, claim not only that Macedonians don’t exist but that Macedonia is Greek for historic reasons.

For modern Greeks to make such claims they will need to provide evidence to (1) prove that Macedonia does not belong to the people that were living on it before Greece annexed it in 1913 and (2) prove that the modern Greeks are indeed the rightful heirs of Macedonian lands.

The purpose here is to examine the legitimacy of the  Modern Greek claim that “Macedonia is Greek”. To do that we will need to examine (1) who are the modern Greeks and (2) why is their claim, as they put it, “the only valid claim?” When Greeks say that “Macedonia is Greek” do they mean all of geographic and historic Macedonia or just the part that was annexed by Greece in 1913? If they mean only the part of Macedonia that was annexed by Greece then we need to examine how Greece acquired it. There is plenty of historical evidence to highlight how Greece acquired Macedonian territories between Macedonia’s invasion in 1912 and the conclusion of the 1913 Treaty of Bucharest. Evidence shows that the Macedonian lands acquired by Greece were acquired by war and arbitrary means which has nothing to do with historic claims.

If however all of geographic and historic Macedonia is claimed to be Greek then Modern Greeks will have to show additional proof as to (1) why they did not register their claims during the signing of the 1913 Treaty of Bucharest and (2) why they willingly allowed Serbia and Bulgaria to take 49% of Macedonian territories.

The reality is that there were no definite plans on how to divide Macedonia since Macedonia never belonged to any of its neighbours. There were no national dividing lines to speak of other than the Patriarchist or Exarchist affiliated villages which existed all over Macedonia. So after the first Balkan War ended in 1912 arbitrary borders were set up more or less where the invading foreign armies stopped their advance.

Serbia was looking to gain access to the Adriatic Sea but Austria, Hungary and Italy prevented that by proposing the creation of Albania. This loss of territory on the Serbian side lead to renewed conflict in the region sparking the second Balkan War involving Greece, Serbia, Bulgaria and Romania. 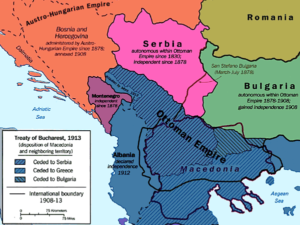 As a result of this, the original borders proposed after the first Balkan War were shifted and Macedonia was once again arbitrarily partitioned.

According to military historian Dr. Vanche Stojchev, author of the book “Military History of Macedonia”, while the Treaty of Bucharest was being drafted in 1913 the occupying armies were still fighting in Macedonia. Every time one side took a hill or a ridge from the others its military commander telegraphed his counterpart in Bucharest who in turn asked the commission to modify the maps to include the new gains.

Russia only accepted the treaty because it was pressured by the other Great Powers, which in reality means the treaty should not even be valid.

“The reason why Macedonian institutions are not yet affirming the idea that Macedonian roots extend from the ancient times to today is that everything that was taught in Macedonia up to now had to be politically correct. We were taught a politicized history which catered less to reality and more to political aspects on how history should be viewed,” says Professor Dr. Vanche Stojchev.

However, before Modern Greeks can answer questions like “Why is Macedonia Greek?” they will need to answer the ultimate question and that is “What makes their claim legitimate?” On what basis can Modern Greeks say that Macedonia belongs to them instead of to the people who were already living there before Greece annexed it?

To prove that this “continuous” Greek lineage exists, we will need to examine historical evidence prior to and leading up to the creation of the Modern Greek state. In other words, we need to know more about the Modern Greeks and their existence before the Greek state was created in 1829.

Modern Greeks have already registered their claims about Macedonia and the Macedonians. Their claims can basically be summarized as follows;

If we analyse these claims then, based on Greek logic alone, we can conclude that the people living in Macedonia are Slavs who came to Macedonia during the 6th century AD. So in effect, the Modern Macedonians, or “Slavs” as the Greeks like to call them, according to Greek claims, have been living on Macedonian lands for say 1,500 years?

Now based on the above, Modern Greeks will have to show that they have legitimate claims to Macedonian lands that extend more than 1,500 years. That means that Modern Greeks will have to prove that their ancestors owned Macedonian lands prior to the 6th century AD. Naturally, if they want to be taken seriously, modern Greeks will need to prove that they are the rightful heirs of those lands. I will be more than willing to accept continuity of the nation’s culture, traditions and language. In other words, did the Greeks of the 19th century prior to the creation of the Modern Greek state share a similar culture, similar traditions and a similar language with the Greeks of 1,500 years ago?

Let us begin by looking at the culture, tradition and language of the Modern Greeks of the 19th century. 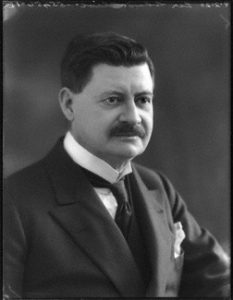 Sir Charles Eliot in his book “Turkey in Europe” on page 267 says:

“It would be amazing if the people who are now called Greeks are of the physical types as what are styled Ancient Greeks, which generally means the inhabitants of Athens and Sparta. The Greeks have spread around the Aegean and Black Seas, and come into contact with the inhabitants of the littoral. The Macedonian Empire must have had a large non-Hellenic substratum. Constantinople and all Continental Greece were for centuries ruled by Romans, and during many subsequent centuries invaded and colonized by Slavs. The Crusades and Latin conquests brought a large influx of western Europeans, commonly called Franks; and in later times, extensive Albanian settlements were made in Greek districts. Clearly, the Modern Greek must be of very mixed blood.”

Again Sir Charles Eliot in his book “Turkey in Europe” on page 299 says: “It must be confessed that, though the Greeks showed more energy than any other Christian race, those who now remain in Turkey except the Islanders) are not remarkable for physical vigour or military capacity. This, is no doubt, partly due to the fact that the people who revolted against Mahmud were largely Hellenized Vlachs and Albanians, who, under the modern system would, not be regarded as Greeks. Nowadays the robust agricultural population is rarely Hellenic in its sympathies, for, as already mentioned, there are comparatively few parts where it is really Greek.”

For starters, he is telling us that the so-called “Greek” of the 19th century had very few to none of the traits of the ancient Greeks from 1,500 years ago. He is also telling us that the 19th century so-called Greeks were not really Greeks at all but Hellenised Albanians and Vlachs. In other words, they were Albanians and Vlachs made to feel like they were Greeks.

Lucy M. J. Garnett in her book “Greece of the Hellenes” published in 1914 on page 31 says: “The height standard for the Greek army is nominally 5 feet 1 inch the average Hellene by no means being a tall man. Nor is this standard rigidly adhered to, for a recruit is not rejected on the score of height, if certified physically fit in other respects. Some of the hardiest soldiers are recruits among the Albanians and pastoral Koutso-Vlachs of Thessaly who form an important contingent.”

Lucy M. J. Garnett in her book “Greece of the Hellenes” published in 1914 on page 33 speaking about the dress of the Greek Royal Guard says: “His feet are shod with Albanian red leather shoes the upturned, pointed toes of which are finished with woollen turfs.”

Lucy M. J. Garnett in her book “Greece of the Hellenes” published in 1914 on page 33 and 34 also says: “All Greek soldiers are required to be able to read and write, and if a conscript on joining has not already acquired those rudiments of education, he is put to school. Notwithstanding the educational efforts of the Government as many as 30 percent proved fifteen years ago or so to be completely illiterate, which not more than 25 percent had advanced beyond the ‘three R’s’. This may be partly accounted for by the fact that these conscripts include both Albanians from the settlements in Attica and other parts of the Kingdom and pastoral Koutso-Vlachs, all of whom habitually speak their own dialects, and learn Greek only as a foreign tongue.” 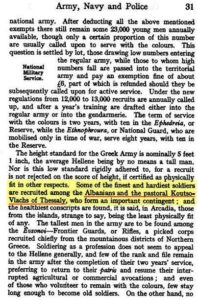 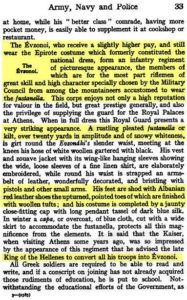 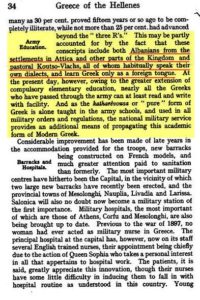 So what is Lucy M. J. Garnett telling us about the Greeks of the 19th century?

My aim in this here is to show that Modern Greeks are not only NOT entitled to the Macedonian heritage, but they should not even be entitled to be called Greeks. Underneath the highly polished “Modern Greek veneer” hides an artificially created nation constructed from the bones and ashes of the Macedonian, Albanian, Vlach and Turkish cultures that once flourished on those lands.

If you can spare 45 minutes of your time, watch this true documentary below on the ‘Creation of Modern Greece – Skai 1821’  as shown on Greek National TV. It is written and Produced by Greek Historians with English Professors who also comment in the video.