“There are two ways – either finding a solution to the problem, or joining NATO under a temporary name, and proposing negotiations with Greece over the problem that Greece has with our constitutional name, about the EU integration. They know that for us there is an equal tendency towards the EU,” Zaev said in an interview with MRT (Makedonska Radio Televizija). 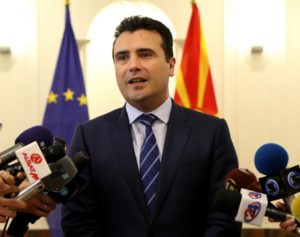 World Macedonian Congress –Australia has called on newly appointed Prime Minister Zoran Zaev and his Administration under SDSM to reconsider acquiescing to enter the Republic of Macedonia in NATO or the European Union as the acronym FYROM.

The World Macedonian Congress- Australia National Executive Co-Chairmen Jim Stefanovski and Goran Kotev, in full support of Macedonian Communities throughout Australia, condemn in the strongest possible terms this recent development, as an attack on the Macedonian Identity and name, and implore SDMS to reconsider their actions which will not be able to be retrospectively nulled.

Mr. Stefanovski said, “The truth is, there should not have been any negotiations on the name, accepted by any Government, in the first place. The people of Macedonia have no problem with their country’s name, a historical name that belongs to the Macedonian people and has been with them for over three millenniums. It is Greece that has a problem! So, it is not a dispute between Macedonia and Greece but a one-way dispute… We would like to remind Mr. Zaev the country’s name does not belong to him to do with as he pleases.”

The World Macedonian Congress, Internationally, have also released a statement, “The Macedonians from all parts of geographical and historical Macedonia, DO NOT AGREE TO ANY NAME CHANGE and we ask all Macedonian Politicians to cease with any further negotiations with Greece, UN, NATO, EU or any other country or organisation in relation to our Constitutional name, The Republic of Macedonia.”