The “name issue” involves a protracted dispute over the last 23 years between the two Balkan Polities over Macedonia’s right to use its constitutional name, “The Republic of Macedonia”. The Greeks claim that Macedonia is a region in Greece and that, therefore, the country Macedonia has no right to monopolize the name and its derivatives (“Macedonian”).

The Greeks feel that Macedonians have designs on the part of Greece that borders the tiny, landlocked country and that the use of Macedonia’s constitutional name internationally will only serve to enhance irredentist and secessionist tendencies, thus adversely affecting the entire region’s stability.

Macedonia retorts that it has publicly renounced any claims to any territory of any of its neighbors. Greece is Macedonia’s second largest foreign investor. The disparities in size, military power and geopolitical and economic prowess between the two countries make Greek “fears” appear to be ridiculous. Macedonians have a right to decide how they are to be called, say exasperated Macedonian officials.

The Greek demands are without precedent either in history or in international law. Many countries bear variants of the same name (Yemen, Korea, Germany until 1990, Russia and Byelorussia, Mongolia). Others share their name with a region in another country (Brittany in France and Great Britain across the channel, for instance).

In the alliance’s Bucharest Summit, in April 2008, Macedonia was not invited to join NATO. Macedonia was rejected because it would not succumb to Greek intransigence: Greece insisted that Macedonia should change its constitutional name to cater to Greek domestic political sensitivities.

In the absence of the glare of the global media, its coverage and exposure, the fourth-rate diplomats that stand in for the International Community in Macedonia ineffectually cajole its government with thinly veiled threats, Cassandra-like apocalyptic scenarios, and verbal bribery. To achieve their aims, they propagate three myths (not to say deceptions):

Myth number 1: The conflict initiated by Greece is “normal” and not intractable

The truth is that the “Name Issue” cannot be resolved because the diametrically opposing positions of the parties occupy the same semantic and geopolitical space. Both fear for their cohesion and identity should they compromise.

The Greek demand – that Macedonia and, consequently, the Macedonians change their collective (national) name – is unreasonable ab initio. Unreasonable demands cannot be rendered reasonable by being modified or amended. Greek “flexibility” and “reasonableness” are, therefore, smokescreens behind which lurk irrationality and extremism.

Sovereign polities should never succumb to blackmail and extortion: not because of ethical or moral considerations or matters of national pride, but because concessions only tend to enhance the insatiability of blackmailers and extortionists. Macedonia gave in to Greek blackmail once (with regards to its flag), yet this did not slake Greece’s thirst for more.

The name issue negotiations consume vast and scarce resources, especially in terms of human capital. Macedonia is a poor country and this Greek diversion is proving to be lethal as far as its economic development and geopolitical prospects go.

In truth, Macedonia is winning the diplomatic and public opinion battle the world over. More than 130 members of the United Nations recognize it by its constitutional name and not a week passes by without a commiserating op-ed in some prime medium in the West. Greece looks bad: an extortionate bully in the throes of economic mayhem and domestic terrorism. Faced with such an asymmetry in global sympathy, why should Macedonia be the one to throw in the towel?

Myth number 2: A lack of progress (read: Macedonian capitulation) on the name issue will foster inter-ethnic unrest and worse

Ardent, well-choreographed protestations aside, the Albanians in Macedonia ought to be delighted with the lack of progress on both NATO and EU accession. The overwhelming majority of Albanians in Western Macedonia are enmeshed in activities which can only be charitably described as “informal”. The Albanians are the engine that runs the grey and black and criminal economies in Macedonia. EU accession will put an abrupt stop to all these lucrative endeavors and unravel networks that took decades to build and maintain.

Furthermore, the Albanian insurgency in 2001 was the outcome of copious nods and winks (and dollops of materiel) on the part of the United States and, to a lesser extent, the EU. No such support, implicit or explicit, is to be found today: the International Community is firmly and irrevocably committed to the Ohrid Framework Agreement and will not allow the Albanians to use weapons to try to alter its generous terms.

Albanian posturing concerning the Macedonian procrastination with regards to the Name Issue has to do with internecine strife between the two big Albanian parties: DUI and DPA. They both leverage the name issue and threaten civil war in order to re-divide the spoils of government on all levels.

The EU is in the throes of a life-threatening crisis and the entire enlargement project is in ever-growing doubt. Even if the EU were to emerge unscathed from this predicament, its harried officials still regard the Western Balkans as a cesspit, an Ottoman-Byzantine-Oriental Muslim-infested relic in the heart of an otherwise civilized, genteel, and Christian Europe (read: West). The more bigoted of the EU members are going to drag the negotiations with the likes of Macedonia as they have been doing with Turkey for decades now.

Macedonia currently enjoys all the benefits of EU membership without incurring any of its costs: it has free trade, visa-free travel, and access to regional development funds and EU tenders. The costs of accession are bound to be crippling: Macedonia’s sheltered and inefficient industries will crumble in the face of European competition; its judiciary and legislature will be buried under the 84,000 pages of the acquis communautaire; environmental, sanitation and labour rules will render the private sector, such as it is in this benighted place, all but dysfunctional and insolvent; brain drain will likely reach epic proportions. Macedonia is not ready for EU accession. For the time being, it is better off as it is.

In the long-term, accession will bring with it sizable benefits in the transfer of technological knowledge and management skills and in encouraging foreign direct investment. But these welcome side-effects and by-products of EU membership depend crucially on an all-pervading internal transformation. Macedonians lack the skills, the knowledge, the emotional maturity, and the cultural background to have a state of their own, let alone a democracy. They have yet to develop a sense of being part of a cohesive collective. Their rampant individualism is malignant and they all perceive the state and any form of authority as potential and actual enemies.

So, why are Macedonians so keen on joining the EU?

Some of them hope to turn a quick profit as asset prices (shares, real-estate) react to the good news. Others can’t wait to abandon ship and join the throngs of economic immigrants from Bulgaria and Poland. Not one Macedonian I have met realizes the full implications of EU accession and not one of them gives a fig. They all perceive the EU as a “get-rich-quick” scheme. 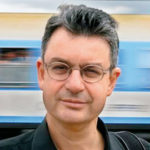 Sam Vaknin ( http://samvak.tripod.com/cv.html ) is the author of Malignant Self Love – Narcissism Revisited and After the Rain – How the West Lost the East as well as many other books and ebooks about topics in psychology, relationships, philosophy, economics, and international affairs. He served as a columnist for Central Europe Review, Global Politician, PopMatters, eBookWeb , and Bellaonline, and as a United Press International (UPI) Senior Business Correspondent. He was the editor of mental health and Central East Europe categories in The Open Directory and Suite101. Visit Sam’s Web site at http://www.narcissistic-abuse.com