Australian Bureau of Statistics, or ABS, held a rather controversial census August 2016.  The ABS is a national statistical body that provides data on economic, social, population and environmental factors, and is important for future urban planning, taking into account the demographics of a particular area or region.

The challenges migrant minorities face is representation on the compulsory paper forms & electronic lodgement forms, but even more so, the language barriers that are faced by Macedonians within Australia is an issue.

Macedonia was partitioned by the Treaty of Bucharest in 1913 as a result of the 1912-13 Balkan Wars-  51percent amongst Greece & remainder into Bulgaria, and Albania. The Republic of Macedonia was absorbed into Yugoslavia, as a separate Macedonian state and identity.

Macedonian migrants have been coming to Australia as early as 1900’s, both as ‘pechalbari’ (Migrant Workers) – providing a workforce to the country where work was plentiful, and many Macedonians who came out to ‘pechalba'(To Earn), brought their families out & became naturalised Australians. 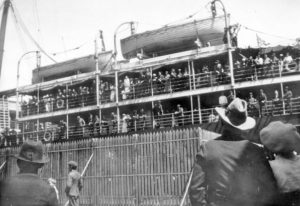 Following the Second World War, many Macedonians came out as part of the Australia “populate or perish’ program – where a workforce was required to rebuild the nation,  especially within the area of industrialisation. Arthur Calwell was Labor Immigration Minister attributed to the population or perish program and many came out during the 1950’s as a result.

Macedonians from Greek occupied Macedonia emigrated through refugee programs, Red Cross,  following the Aegean Civil War and displaced children through Macedonia’s forgotten generation of children the Exodus of the child refugees, “Decata Begalci”. The 1920’s saw a population exchange to destabilise the Macedonian minorities behind the Greek borders, with Turkey.

Since the break-up of Yugoslavia,  Republic of Macedonia was the sole nation state to break away peacefully, and final country to declare Independence in 1991. What has ensued with Greek territorial aspirations amongst the Republic of Macedonia is a breach of basic  International human rights to the country, holding sanctions and embargoes against the Republic, holding the country to ransom against the use of the Macedonian name which has been in existence for thousands of years.  Greece having a seat on what was the European Council, EU, and being a member state has held the country to ransom, and unfortunately, the petulance of Greece has had countries acquiesce to their ludicrous demands on the country, to remove the name, Macedonia, instead stating the country should be called an acronym – FYROM – Former Yugoslav Republic of Macedonia,  in itself a farcical contradiction, seeing Yugoslavia no longer exists.

Unfortunately, basic human rights and the right to self-determination does not exist, a process of cultural and ethnic genocide , systematic denial of human rights, changing toponyms, names of Macedonians and Macedonian territories in occupied regions have seen western nations turn a blind eye to these atrocities.

This leads us to the Australian Census-

Macedonian is one of the top 10 spoken languages within Australia. Unfortunately, due to the powerful Greek lobby and political representation of the Greek community in both Houses of Parliament, has seen Australia push the FYROM acronym & does not recognize the Republic of Macedonia by their constitutional name.

This in itself leads to inaccurate census data to be misrepresented, where Macedonians become even less in portrayed data, and insignificant in comparison to other nationalities. The challenges Macedonians face is, when completing census online or paper, must tick the box  ‘other’ each time they need to state their ethnicity, or religious affiliation, a majority are Macedonian Orthodox within Australia. Place of birth of migrants automatically become ‘Greece, Bulgaria, Albania’ – regardless the fact that they were born in the occupied present-day borders of the country.

Macedonians face challenges, in inaccurate portrayal and under-represented figures when it comes to providing services for the areas they reside in.

Unless Australia acknowledges and begins to refer to Macedonia as the Republic of Macedonia and not FYROM, which is highly insulting, then Macedonian numbers will be greatly incorrect and Australian Macedonians are experiencing in effect, indirect discrimination.

Macedonians have some degree of acknowledgment from solitary parliamentarians, however, until Macedonians are able to become parliamentarians in both houses of parliament to effect any sort of change, we are powerless as a people to change the unfortunate under-represented and inaccurate census figures.

The writer, Julie Corby is the Branch Regional Manager for South Australia for the World Macedonian Congress – Australia.