ETHNOGENETIC DIFFERENCES BETWEEN THE MACEDONIAN AND THE BULGARIANS!

Recently, this campaign has been reinvigorated, as the Director of the State Archives of Bulgaria, Bozidar Dimitrov officially stated to the media that the Republic of Macedonia should change its name and be called “Western Bulgaria”, and that soon the children in Macedonia will learn “Bulgarian History” at school. 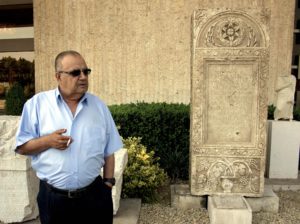 We remind everyone that these words were spoken by an official representative, appointed to that position from the Bulgarian government. There are countless examples and similar situations where attempts have been made to impose the foreign Bulgarian history and ethnic name on the Republic of Macedonia.
Unfortunately, such tendencies are supported by some politicians currently in the Republic of Macedonia… without getting into the political side of the argument, we will stick to historical facts ONLY!

As a resolute answer to all this, we are happy to announce that we are in the process of Producing a 45 – 60-minute TV documentary, titled “Ethnogenetic differences between the Macedonians and the Bulgarians”.

The documentary will show the parallel occurrence of the Macedonian and the Bulgarian nation so that everyone can understand why Macedonians have never been Bulgarians. Among other things, arguments will be presented according to the following:

– It is well known that according to the results of DNA analysis researched in several European institutions, the present day Macedonians, are overall, descendants of the ancient Macedonians. 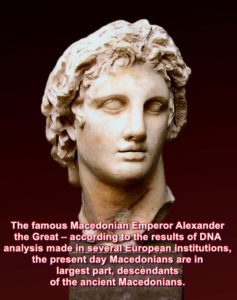 There is a lot of other evidence supporting this fact. Even the official Macedonian stance today recognizes that the ancient Macedonians were also ancestors of the present day Macedonians.

– According to official Bulgarian historiography, today’s Bulgarian nation is ethnogenetically created by the interference of the native Thracians, the Slavs – Anti (who settled in Bulgaria in the early Middle Ages) and the Turko-Mongol tribe Bulgarians who settled in north-eastern Bulgaria at the end of VII century.

From here, the differences in the origin between the two peoples will be clearly identified.

According to Bulgarian and foreign historians, the real ethnic Bulgarians were a Mongolian tribe that spoke a language similar to Turkish and belonged to the ‘yellow race’. The well-known Bulgarian historian Vasil Zlatarski gives the names of the four (quoted) “Huno-Bulgarian hordes” from which the Bulgarians were created. Their names are: ‘Kupi-Bulgars’, ‘Duchi-Bulgars’, ‘Olhontor Blkar’ and ‘Chdar Bolkar’. So, did the present Macedonian nation come from these hordes?

Today’s Bulgarians, treat the Turko-Mongol Bulgarians and their khans, as their ancestors and first rulers of their people. If someone says that today’s Bulgarians are “Slavs”, the question is automatically raised: If they are Slavs why then do they claim that the Turko-Mongolian Bulgarian Khans (Kubrat, Asparuh and others) were their first ancestors? Among the Macedonian public, it is little known that in the thirties and forties of the 20th century there was a nationalist organisation in Bulgaria called “RNBs, “Ratnici za Napredok na Blgarštinata” (“Warriors for the Progress of Bulgarian” ), (RNB), in which hundreds of thousands of Bulgarians were members and whose statute read that the Bulgarians were not “Slavs”, but they are the direct descendants of the ‘Huno-Tatars’. This Documentary will show data that some Bulgarians still consider themselves to be the same people with the Tatars.

Records from former and contemporary Tatar historians will also be presented, which also claim that Bulgarians and Tatars are the same people! The well-known Tatar historian Ahmedzhan Khalikov in his book “What are we: Bulgarians or Tatars?” (Kazan, 1992) presents historical pieces of evidence according to which, today’s Tatars in Russia are also direct descendants of the Bulgarians of Han Kubrat. With all due respect to today’s Tatars we ask the question, if we Macedonians are “the same people” with the Bulgarians, it would turn out that we are the same people as the Tatars? This would be a meaningless and nonsensical argument to get into.

The first known and acknowledged Bulgarian, Khan Kubrat spent his whole life in his homeland of Asia. According to the “Directory of Bulgarian Khans” (“IMENIK NA BALGARSKITE HANOVE”), a valuable chronicle of the Bulgarian history from the 8th century stated that Khan Kubrat and his descendants had shaved heads (in harmony with the Mongolian tradition) and wore Salwars. Khan Kubrat never stepped foot in Europe, and probably had never heard of Macedonia in his life, let alone be the “first ethnic ancestor” of today’s Macedonians!

– There are numerous documents on the Bulgarian medieval emptiness of Macedonia, which we will present exclusively from Bulgarian history books. The Bulgarians were military allies of the Ottomans in the time when they occupied Macedonia, right after the Battle of Marica.

Numerous records (exclusively from Bulgarian sources) will be presented on the massacres which the Turko-Mongol Bulgarians carried out after their arrival from Asia on the natives of the ‘Slavs’ and Thracians on the territory of present-day Bulgaria. Thus, for example, the Bulgarian Khan Omurtag said that he would kill the Slavs (quote)… “as certainly as the sun shines in the sky”, while the Bulgarian Khan Krum massacred several thousand Thracians in Serdika (today’s Sofia), although he had previously promised that he would not kill them if they surrendered.

Taking all the above into consideration, one would describe it as, “black humour” when you have the descendants of the so-called “Slavs” and Thracians in Bulgaria who are now “proud” of the ethnic name “Bulgarians” – a name that belonged to the murderers of their ancestors!

– Today’s inhabitants of Bulgaria are largely and undoubtedly the descendants of the famous ancient Thracians. But due to certain circumstances, they were imposed on the foreign Turk-Mongolian and Asian name “Bulgarians” which they carry to this day, although the real Bulgarians never settled massively on the entire territory of present-day Bulgaria, but only in its northeastern part. 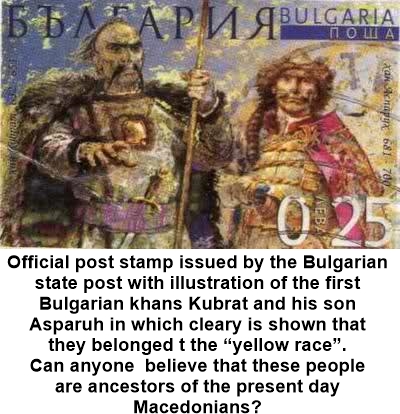 Testimonies from foreign travel writers and historians will be presented in the hour-long documentary, claiming that Bulgarians did not live in Bulgaria, but Serbs, Greeks, Illyrians, Tatars, Myrmidons, Pannonians and even Croatians, which is a clear proof that Bulgarian citizens did not even have Bulgarian ethnic awareness at all in the first half of the 19th century.

–  There are old documents (expeditions from foreigners, geographical maps, etc.) in which the cities and places: Sofia, Shumen, Plovdiv, Kyustendil, Gyueshevo, Samokov, Rila Monastery and others are marked as “Macedonian”.

Contrary to the lies that the Bulgarians gave the Slavs- literacy (as we hear a similar version from the Greeks), data will be presented showing that the Bulgarian khans, at the time of the activities of the holy brothers Cyril and Methodius, did not even know how to speak Slavic, let alone write. The first who started to learn “Slavic” was the Turk-Mongolian Bulgarian, Khan Boris, who began to learn Slavic only after accepting Christianity in the year 866 AD (three years after the Great Moravian mission of the holy brothers Cyril and Methodius).

– These and many other interesting and less known records and data which will be presented in the documentary which will be brought to light for the first time in, “Ethnogenetic differences between Macedonians and Bulgarians”.

In relation to the broadcasting of this documentary (which will be shown on Macedonian television, and it can be downloaded free of charge from YouTube after it airs on Macedonian national television), a certain amount of money is required to cover the most basic costs of production.

The names of all donors and ads for their business will be announced at the end of the documentary if people choose to have their names listed in the ‘Credits’.

WE URGE YOU TO HELP THIS PATRIOTIC PROJECT WHICH WILL AWAKEN ALL MACEDONIANS and BULGARIANS TO THE TRUTH!

Please visit the ‘Go Fund Me’ Webpage HERE for more details on how you can help.

THE MACEDONIANS WILL REALISE THAT THEY HAVE NEVER HAD ANY CONNECTION TO BULGARIAN ROOTS, AND THE BULGARIANS WILL REALISE NOT EVEN THEY ARE ETHNIC BULGARIANS- AT MOST, ARE DESCENDANTS OF ONE OF THE OLDEST AND RESPECTED PEOPLE IN EUROPE- THRACIANS.

In conclusion, we are convinced that the Author ALEKSANDAR DONSKI and the EXECUTIVE PRODUCER JIM STEFAN will bring a closure to the current debate in Macedonia in relation to the sharing of our Macedonian history with the Bulgarians, as some Politicians and public figures have spoken about of late – BUT WITHOUT ANY MANIPULATION of HISTORY… ONLY FACTS!!

Aleksandar and Jim are also working together on the 40 series Documentary called, “The Ancient Macedonians Were Not Greek’, which is still in production. Please click HERE to visit the Youtube Channel.

This project and new Documentary is proudly supported by the World Macedonian Congress – Australia.

About the Historian, Writer, Author and Director Aleksandar Donski- 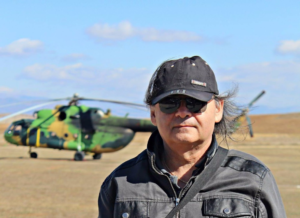 He is an author of 25 books based on history, folklore, religion and literature, as well a few hundred articles in newspapers, magazines and on the internet. He is also an author of a large number of TV and radio documentary programs regarding history, folklore and his travels, for which he has received awards and acknowledgments. His publications have been widely acclaimed in Macedonia and his academic papers on history and linguistics have been presented at international symposia.

Please Click HERE to read the full Interview of Alexander Donski regarding this documentary.

Please help us fund this project