The World Macedonian Congress Australia formally met with the officers and staff of the embassy of the Republic of Turkey on Tuesday to discuss the impending political crisis developing in the Republic of Macedonia and the wider Balkan Peninsula in general, as a means to build friendship and cooperation between the Macedonian and Turkish communities here in Australia and in Europe.

The World Macedonian Congress – Australia (WMC-A) has been in talks with staff from the Turkish Embassy over the last few months regarding the name negotiations being undertaken by the current government in the Republic of Macedonia and was encouraged by the compassion and concern expressed by the embassy officials over the issue. The WMC-A was subsequently invited to visit the Turkish Embassy in Canberra to further discuss the concerns of the Australian Macedonian community regarding the current political climate in the Republic of Macedonia.

WMC-A accepted the invitation and was warmly welcomed by embassy staff as representatives of the Macedonian community by Deputy Chief of Mission Mr. Ilhan Sener. During the meeting, Co-Executive Chairmen Mr Jim Stefanovski and Mr Goran Kotev discussed at length the myriad of issues faced by the Macedonian community here in Australia, in the Republic of Macedonia and how Turkey could assist the Macedonian nation in these matters and in general.

Among the matters formally discussed were the Macedonian peoples irrefutable right to the name Macedonia, the ridiculous human rights violation that is the UN acronym FYROM, the international pressure from the EU and NATO to proceed with the negotiations regarding the alteration of Macedonia’s constitutional name, the rejection of any subsequent referendum to facilitate a name change, the Security Council Resolution 817 (1993), the withdrawal of the unconstitutional Law on the Use of Languages bill in the Macedonian parliament and the annulment of the Zaev-Borisov Treaty to name a few.

Mr Kotev and Mr Stefanovski submitted an official letter to Mr. Sener and the Ambassador, His Excellency Ahmet Vakur Gökdenizler outlining WMC-A’s formal request for assistance from the Turkish government to help the Macedonian people and Macedonian nation achieve its goals of being a strong and independent republic at a time when international pressures are seeking to destroy the unitary and sovereign nature of the Republic of Macedonia.

The Turkish Embassy in Canberra warmly accepted our letter requesting Turkish assistance and undertook to forward it to the office of the President of Turkey His Excellency, Mr Recep Tayyip Erdogan, the government of Turkey and also the Turkish Embassy in the Republic of Macedonia.  It was noted during the process that President Erdogan has publicly stated Turkey will always remain a friend of Macedonia and will support the nation unreservedly during these unconstitutional, forced name negotiations. Embassy staff reiterated that Mr Erdogan has made recent comments promising to veto any motion to include Macedonia in NATO by any name other than its rightful constitutional name of the ‘Republic of Macedonia’.

Mr Stefanovski and Mr Kotev spoke of the Macedonian and Turkish communities’ longstanding mutual respect which reinforced our shared perspective on the importance of stability and prosperity in the Balkans as well as the importance of respectful co-existence here in Australia. WMC-A also extended its appreciation to the people and government of Turkey for being the first nation to officially recognise Macedonia under its constitutional name.

Over the past 30 years, the Macedonian and Turkish communities both in Australia and in Europe have grown ever closer, recognising our common future as European nations, our shared strategic regional perspective and the fact that our two nation’s economies have become more integrated, benefitting both countries and contributing to regional growth.

WMC-A has had a great working relationship with the Australian Turkish community in the past and the development of a plan to work together as like-minded partners to foster these interests in the future was agreed upon by all in attendance. “Our communities in Australia should work together to open a new, dynamic chapter in our mutual respect and support by deepening existing areas of cooperation while catalysing new cooperation initiatives capitalising on our respective and complementary strengths,” said the co-Chairmen in a joint statement.”

Mr Kotev and Mr Stefanovski emphasised that Macedonians were overwhelmed and incredibly appreciative of the support shown to the Macedonian community at the recent rallies in both Melbourne and Sydney by Turkish Australians. It was a point that was not lost on those who attended.

The World Macedonian Congress Australia would like to extend our gratitude to the Embassy of the Republic of Turkey, Ambassador Ahmet Vakur Gökdenizler, Deputy Chief of Mission Mr Ilhan Sener and to all of the gracious Embassy officials for their hospitality and respect towards WMC-A and for the Macedonian public in general.

The World Macedonian Congress – Australia is discussing similar agreements with other Embassies in Australia. 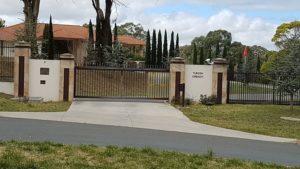 Embassy of the Republic of Turkey – Canberra 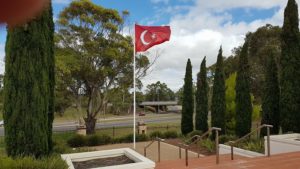