The Myth of the Descent of the Slavs

for Nomadic universality- (Translated from Greek)

Identity in Eastern Europe was based on multiple and ever-changing criteria in the course of history. Whether it was language, religion or ethnic integration, the identities for many Balkan peoples were fluid. One of these identities is the Slavic ethnic identity, a term with strongly politicized connotations. Older theories argued that all Slav-speaking people have a common origin and are invaders who have moved to the Balkans and Central Europe. Later, these theories were used in modern politics to support an outdated status quo or territorial claims of non-Slavic groups. But there are elements, both recent and historical, that give a different picture. The Slavs are linked but not necessarily blood and an outbreak, and those who assume the second have often used this hypothesis to justify their own territorial claims and to undermine those of others.

Let’s start with the very word “Slav”. This word is, in the final analysis, an altered form of Sloveni, which the Slavic tribes called themselves. However, it is not clear whether these two terms are synonymous. The Slavis a main name, representing an ethnicity. Sloveni is a descriptive name that is a relational term. It equates to a notional or real affinity in the form of linguistic similarity between at least two different populations. In other words, a Macedonian can not, technically, be “Slovenian” on his own. A Macedonian and a Serb can be Sloveni because both speak a common language. In fact, the word Sloveni itself comes from the common Slavic word Slovo, meaning “word”. So, the people who called themselves Sloveni could, to a degree, understand one another. However, sharing a common language does not necessarily prove that there was a great movement of Slavs who managed to conquer and colonize almost all of Eastern Europe and part of Asia,

Most supporters of Slavic migration theory focus on invasions against the Byzantine empire in the Middle Ages. Like all other empires, and the Byzantine was attacked, looted and attacked by various races. Since the 6th century, a group of undefined “barbarians” has begun to gather along the Danube and attack regularly in Byzantine territory. Primary sources indicate that there were Illyrians, Macedonians, Greeks, Thracians, Geths, Venets, Sarmats and Scythians.

The Thracians, according to Herodotus [1] , were the most numerous nation in Eurasia; only the Indians surpassed them. In addition, Polybius [2] also wrote that Macedonians and Thracians were connected. The remains of the Thracian language also support this conclusion because they have a striking resemblance to the modern Salt-Slavic languages. If modern historians accepted this idea, this would create a breach in the model of Slavic migration, because the Thracians were widely accepted to be indigenous. Much of the rest of the Thracian vocabulary is Slavic [3], as the following hypothetical sentence, made entirely of known Thracian words, shows.

Nevertheless, the theory remains that a race, for which there are no references before the 6th century, appeared at some point behind the Carpathian Mountains to eventually become the largest ethnic group in Europe, replacing Thrace with this role. The Thracians not only covered the same areas as the modern Slavs, but also their languages were connected, as it turned out. There are detailed records of the movement of the Anglo-Saxon, the Normans, the Goths, the Tatar, the Chechens, the Mongols, the Turks and other groups; but Slavic movement, which would certainly be one of the most massive population movements in recent history , passed almost unnoticed by historians. This raises the question:

The first reference to the Slavs comes in the 6th century by the pseudo-Caesar of Nazianzinus, who mentions them as Slavan. Most sources place the Slavanians along the Danube River, and no source speaks of any recent arrival. Indeed, the Byzantine chronicler Theofylakos Simokattis provides an interesting perspective on what he might mean to the Byzantine Sklawians . He says: “As for the Getae, that is the herds of the Sklabes, they were ravaging the regions of Thrace” [4]. Getae was an indigenous tribe of Thrace, for which there are reports from ancient times. It is clear that they have not migrated from nowhere, nor were they previously known otherwise – only Geths. One possible explanation is that they have labeled them as “Sklavinos” because they, along with other races, have begun to attack the Byzantine Empire. The “Sklavians” were a passerby name for the Byzantines for all the different races that made such raids. And, most importantly, this name was not limited to the attackers; it soon began to be used to identify local populations that were also revolting against the empire. For example, some names of Slavic “tribes”, such as the Timokanes, the Strymonians, the Caranians, are clearly Balkan origin, yet these groups were also called “Sklavinos”.Slavan , based on Sloveni, ended up being a “rebel,” with a diminutive tone. In other words, they did not become Slavanians because they spoke exclusively a Slavic language. Indeed, some Slavic tribes have names with Iranian and Scandinavian roots [5] . Although some groups may use Slavic languages as lingua franca, what we have to keep is that they all became Slavani because at least some of the participating groups used the term “Sloveni” to declare their kinship relations. Since the indigenous populations of the population began to support their attacks and form rebellion zones called Sklavinia, the dying term became synonymous with the “anti-Byzantine guerrilla” or “barbarian raider”. 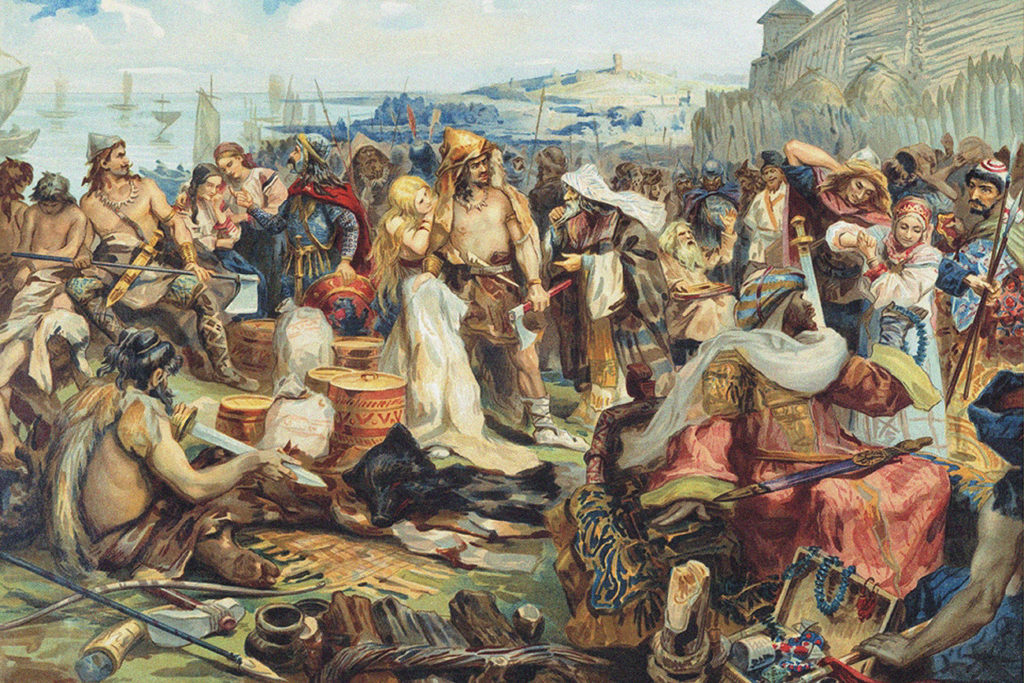 The rumored immigration shines through its absence from oral or written references to Slavic folklore. In Macedonian folk culture, which always included songs and stories about ancient Macedonian kings, the Macedonians are not referred to as Slavs, nor are there any talks about any movement from a region other than the Carpathians.

However, with the nationalism of the 19th century sweeping the Balkans, the term “Slavs” reappeared as an integral part of the identity of some peoples, this time with an ethnic character. Where previously affiliated with the relatives, in the 19th century, at the time of mass historical revisionism, we had the rebirth of the term “Slavs” of new importance. Strongly influenced by the German theory that all nations must have ancestors in the ancient world, the futile search for some Slavic origin was based on a linguistic and literary endeavor, not history and archeology as a means of identifying ethnic origin.

The first theory put forward was based on a linguistic analysis of the Slavonic herbal vocabulary. Several linguists have argued that since for many tree species USING Uday loan words from German, Slavs should come from an area without such trees [6]. The region they reached was the members of Pripet in present-day Ukraine. This unification and the identification of the origins of the numerous Slav nations in Pripet had a double effect. First, he proved that the Slavs were not indigenous in their own country, thus justifying the occupation and possession of these lands by others. Choosing to characterize the various peoples only with the name “Slavs”, the Great Powers displayed them as inferior. This label linked them not only to the impression that they are of vague origin, but also to the “slaves”. This correlation continues to be observed today in many languages: e.g. in Spanish the slave is esclavo, while in Arabic Saqaliba.

Modern research has revealed that it is a mistake to follow such an approach to identify origin. In an attempt to consolidate the Slavic homeland, geneticists isolated a special simple group – a group of related DNA variants – and ruled that it is the “Slavic gene”. This simple R1a group, as it is said, naturally presents the highest frequency in Poland, Ukraine and Belarus, with an average of 65 to 70% [7] . In the South Balkans, however, the average frequency was only around 15%, which is not enough to prove mass movement. What is even more problematic about the theory of Slavic movement is that some Scandinavian countries have a higher frequency: about 30%.

The problem with the use of the title “Slavs” to declare some blood origin is not only about the Macedonians. In the 20th century, the Croats began an effort to prove that they were of Illyric origin, and the Polish schism. Both efforts were suppressed by the Austro-Hungarian and Russian empires, respectively. With the outbreak of the Second World War, the strong unity created with the Slavic ethnic identity began to cost enormously. In Hitler’s mind, as the Bolshevik revolution had Jewish leaders, all Slavic peoples were considered uninterrupted Untermenschen (submarines). As Slavic peoples like the Czechs and Slovaks had “understood” German lands, the invasion theory proved to be particularly useful for Nazi ideology. After all, this label has hit all nations. Especially Eastern Europe is a gold mine of vivid stories, cultures and peoples. The Slavic ethnic label creates a fraudulent unity that flattens the identities of the people.

It is not paradoxical that this characterization has long been used during the period of communism in Yugoslavia. Tito’s regime has consistently stifled nationalism and non-state identities. By grouping everyone under Slavic ethnicity, it showed all Yugoslavs (in word “Southern Slavs”) to have a common history and an origin, and thus a common future. The theory of Slavic ethnicity and movement also paid tribute to Russia, which could thus appear as “Mother Russia”, since the cradle of the Slavs was on Russian soil. The fact that today Greece adopts this communist inspirational theory to display the Macedonians and others as “simply Slavs” serves the same purpose, now as it does then: unifies a group and violently imposes an identity. Illustrating the Macedonians as Slavs, Greece manages to confuse the distinct nature of their identity and history by associating it with the history of the numerous other Slavic nations. Moreover, the generalization of the use of the term “Slavs” for Macedonians has the effect of ridiculously appealing Macedonian history, such as that of Alexander the Great, since it is supposed that the Slavs later came to the Balkans.

Like all labels, this term leads third-party recipients to generalizations and misconceptions. Fortunately, the move to separate politics from history has begun, and prominent anthropologists and historians like Florin Curta, Mario Alinei and Charles Abraham Bryant are now questioning the Slavic label and the theory of migration as a whole. Identity in the Balkans has the potential to change once more. If we restore the term “Slavs” to its original purpose – to declare affinity -, this will allow not only the reunification of individual identities but also acceptance and visibility of differences.

ORIGINAL TEXT, WRITTEN IN GREEK CAN BE FOUND BY CLICKING HERE