The name “Macedonia” or “Macedonian” was once taboo and could not even be mentioned in Greece. Macedonians were persecuted, many tortured and killed for speaking in Macedonian or stating they were Macedonians. According to the Greeks, there was no such thing as a Macedonian.

However, this all changed in 1988 when the Greek government decided to rename it’s Greek occupied Macedonian land to ‘”Macedonia” from the previously known and official name of ‘Northern Greece’ for the same State, only after finding out the Republic of Macedonia was finally going to be a free and sovereign State, once again. 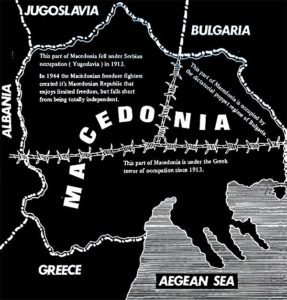 Since the illegal partition of historical and geographical Macedonia in 1912-1913, Greece took a large portion of Macedonia and named the stolen land as, “New Territories“. Why the need to change a historical name and why not leave it as “Macedonia” if Macedonia was always Greek, as they claim? And why would they name it ‘New Territory’ if it was always part of “Ancient Greece”? The Greeks struggle to answer these questions without umming and erring but in typical Greek fashion, they will make it up as they go along.

With all the name changes the Greeks have made to the illegally partitioned and stolen land of Macedonia in their own country, it is only fair to the free and sovereign Country of the Republic of Macedonia, who have never changed the name since its’ creation, to demand the Greeks change their State’s name of Macedonia back to ‘Northern Greece’ as it was up until 1988…then there would be no confusion nor any territorial threat, as they like to claim.

The Macedonians from all parts of geographical and historical Macedonia, DO NOT AGREE TO ANY NAME CHANGE and they ask all Macedonian Politicians to cease with any further negotiations with Greece, UN, NATO, EU or any other country or organisation in relation to our constitutional name, The Republic of Macedonia.

Common sense would tell you, there really should be no name dispute! Macedonia has no problem with its own name, a historical name that belongs to the Macedonian people and has been with them for over three millenniums. It is Greece that has a problem! So, it is not a dispute between Macedonia and Greece but a one-way dispute… Why are there negotiations still going on about Macedonia’s name?

Canadian – Macedonian Author, Risto Stefov explained the situation perfectly by stating, “The truth is Macedonia was never historically Greek. Macedonia was forcefully invaded, occupied and partitioned by Greece, Serbia and Bulgaria during the 1912, 1913 Balkan Wars. After signing the 1913 Treaty of Bucharest, 51% of Macedonia was given to Greece, 39% was given to Serbia and 10% was given to Bulgaria. This was done against the wishes of the Macedonian people who, since Macedonia’s occupation and partition, have fought for their rights. Macedonians fought for their rights during World War II and during the Greek Civil War. While the part of Macedonia under Serbian/Yugoslav control won its freedom and was declared a People’s Republic of Macedonia in 1945 under the Yugoslav federation, the parts under Greek and Bulgarian control remained occupied and its people are without even the most basic human rights.”

Greece is refusing to recognize the existence of a Macedonia beyond its own borders to hide the fact that;

The truth, unfortunately, matters not for the Greeks when it doesn’t serve their interests!